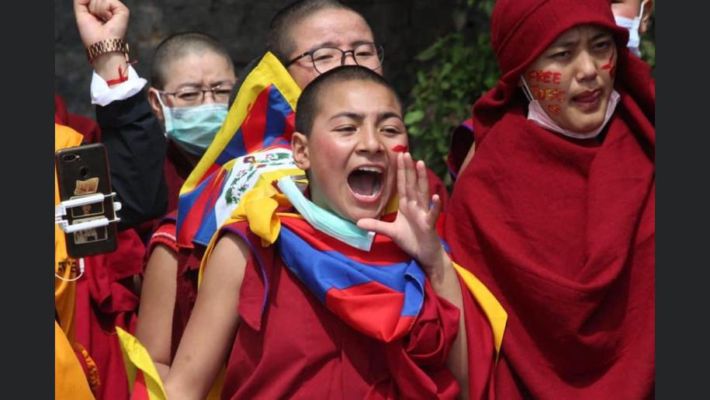 
Tibetan spiritual leader Dalai Lama celebrated his 85th birthday on July 6 and given the border dispute with China; proposals for him to be conferred the Bharat Ratna started pouring in. In the tiny Himalayan state of Sikkim too, the demand is picking up.

Ties between Sikkim and Tibet date back to the time when Sikkim, nestled as a small kingdom, south of Tibet, was still a sovereign country under the Namgyal Dynasty. People in Sikkim, irrespective of their faith have an affinity to the Dalai Lama. When you are in the heart of the state Capital in Gangtok’s MG Marg, a detour upwards from the City’s Square will lead you to a street named ‘Tibet Road’. The name was never changed as it embarks on the historical exchanges between the two kingdoms. Walk into the living room of an average Sikkimese, and you will see a portrait of the 14th Dalai Lama hanging by the wall. He is an embodiment of god to many Sikkimese, and perhaps Bharat Ratna amplifies a voice that has been silenced for 61 years.

On the occasion of Dalai Lama’s 85th birthday, EastMojo caught up with the members of the Tibetan Youth Congress in Sikkim.

“Perhaps the border dispute in Galwan has made India realize what we have said to India for 60 years, never to trust the Chinese. For all these years, our brothers in Tibet have been struggling, revolting. One voice raised against the Chinese government leads to the end of an entire family. We don’t have freedom of speech, expression, movement or religion. We cannot resort to violence and perhaps it is time now for India to show the World, the Tibetan struggle and what it feels like to have a neighbour like China,” says Chung Chung, former president, TYC.

“The Boycott China movement has been a resonating call of the Tibetans in exile for years, India is merely adapting to it now. Tibet being free is beneficial for India as it shares most of its borders with Tibet and not China, technically,” Tenzing Palber says president TYC.

On the night of March 7, 1959 Dalai Lama left Lhasa and is yet to return, generations of Tibetans have tried to fulfil the promise given to their forefathers of taking Dalai Lama back to his palace in Lhasa.

“So wherever he is, that is epicenter of the Tibetan movement. Among the other countries, His Holiness knew India would give the best healthcare and education to the Tibetans because India and Tibet’s culture, belief, roots, and spirituality are similar. All calculations led to India, we are thankful to our forefathers who brought religion from India, who brought the alphabets to Tibet drawn from Sanskrit language. We could have gone to Mongolia or even China, but we got all of that from India”, stated former Tibetan Youth Congress President Chung Chung.

Ever since 1959, the Tibetan government in exile functions from Dharamshala in Himachal Pradesh, fondly referred as the ‘Second Lhasa’ or even the ‘First Capital of Tibetan Freedom Struggle’.

India has not merely given asylum to Tibetans but also given them voting rights. In Sikkim, where some of them settled before Sikkim became part of India, they are also recognized as holders of Sikkim Subject, the ancestral citizenship document.

“Our forefathers just as every Sikkimese had Sikkim Subject, 90% of Tibetans today have Certificate of Identification, the subsequent recognized document to the Sikkim Subject. We guarded the erstwhile Chogyal during the time of the 1974 agitation. We have a municipal councillor in Pema Wongda, who is a representative of the Tibetan people in the Gangtok municipality. We do have a Representative Officer here in Gangtok, who takes all our queries to the Tibetan Government in Exile as well”, stated Chung Chung.

In the past and even today, some of the recognized schools in Sikkim such as Tashi Namgyal Academy, Paljor Namgyal Girls Senior Secondary School and Enchey School teach Tibetan language. “All of which were ascertained in the erstwhile Chogyal regime, when Sikkim was still a country. In the heart of town, there is the presence of Tibetan Private School which teaches in Tibetan, English, Nepali and Hindi and caters not merely to the Tibetan population but also students from other communities. Indian Government has allowed the Civil Services Examination to the Tibetan Refugees, and Residential Certificate holders can also apply. We are eligible even for bank jobs, it has existed for decades now”, said TYC President Tenzin Palber.

Most Tibetans in Sikkim are sentimental about being Sikkimese, partly because taking the Sikkim Subject document into account, they get equal rights just as anyone in Sikkim.

Before 1959, there was a lot of exchange between Sikkimese and the Tibetans. There is a town in Tibet called Dhoktapa, which had a healthy Sikkimese population. It served as the Sikkimese town and is not very far from the current existing border in Southern Tibet, maybe an overnight journey on foot. The town was gifted to the king of Sikkim as relations between the kingdoms was excellent. “After Tibet was occupied by the Chinese, those Dhoktapas were also displaced and had to come to Sikkim, and that makes the most of us, as well. Tibet, did have a sound population of Tamangs and Gurungs from the Nepali Buddhist community,” stated Chundi.

On the terminology of refugee being used, many Tibetans feel they are part of India now. “The struggle was of our forefathers, and they are the ones who have seen Tibet, for us, it is Shangrila, a place we have never seen. If you go to the fundamental right, we were born in India, and we are citizens here now. Still our country is our country, even if we have not seen it. Home is home; freedom is freedom; our place is our place. Sikkim has never dented such efforts of ours. We can openly be ourselves here in Sikkim, carry out work and businesses. Sikkim has blessed us, always. But when we term the border as China border, we are showing or exhibiting a wrong message to the world; it is Tibetan border. There is existence of Indo-Tibetan Border Police and not Indo-China Border Police, for a reason,” said Chung Chung

On the existing border dispute in Tibetan Autonomous Region under China, the Tibetans in Sikkim say, “Don’t just see Galwan, but see other neighbouring countries of India as well. China has been investing, giving them the platform to wage war against India. Pakistan is facing the issues of encroachment, Nepal is and so is Bhutan now. It is the right time for India to raise its voice against China. The boycotting of apps gives us the advantage. We have been crying since 1959 and have done so much. Foot rallies, protest, Bharat Jagao Yatra, hunger strike for 48 days in Jantar Mantar in 1998 where the first-ever self-immolation took place, we wrote with our blood, we went for Tawang Yatra with RSS. Yet, our voice was not heard, China can never be trusted”, said Palber.

On their identity as Tibetans in refuge, another Tibetan youth added, “I feel proud to call myself a Tibetan, there was some shame among our people years ago, but that doesn’t exist. If Tibet were free, that shame would dissipate, the fear of being refugee dissipates. China has been tactical from COVID 19, economic crisis and now border disputes In 1949 when China started invading Tibet, India was freshly out of its own struggle, so India didn’t get time to stand on its feet and help Tibet. Still, now India is a much stronger country and having Tibet as your neighbour will harbour the teachings of the Great 14th Dalai Lama Tenzin Gyatso, that compassion, inevitably wins over struggles.”

Tribute to Rahul Rai – It Shall Rain No More

Be the first to comment on "Tibet is Shangri-La, A Home We Never Saw"