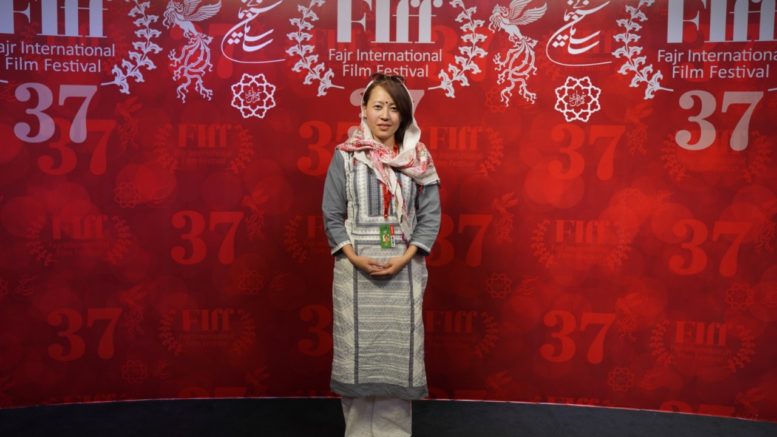 
Tribeny Rai, a young independent filmmaker from Sikkim, is returning to her home State with an award from the prestigious Fajr International Film Festival (FIFF) 2019 held at Tehran.
The FIFF, hosted at the Iranian capital from April 18, concluded on Wednesday evening with a special ceremony at Tehran’s Negarestan Garden.

A total of 60 filmmakers from Iran and 20 other countries had attended the seven-day FIFF which featured workshops and stimulating conversations on world cinema by internationally acclaimed film directors.

Tribeny along with Ruman Hamdani from Kashmir were the only two participants from India selected for the FIFF 2019. She hails from Nandok near Ranipool and is a product of the famed Satyajit Ray Film and Television Institute, Kolkata. She has several award winning short films to her credit.

““Iranian cinema has always been closer to my heart. My first-hand experience of their heart-warming culture has helped me understand their films even better,” said Tribeny regarding her FIFF experience.
The FIFF, among many sessions, also had a Talent Campus Series for the participants. The head of Talent Campus, Maziar Miri awarded the top five students of the festival’s workshops with certificates and diplomas.

Tribeny bagged the second prize for the ‘best short film idea’ category of the FIFF. She had been selected by prominent Iranian scriptwriters Naghmeh Samini and Meharan Kashani amongst the top ten students to pitch their short film ideas.

As shared by the Sikkimese filmmaker, she chose to work on the concept of ‘family’. She pitched the idea of her short film to a German producer and FIFF representative.
Tribeny will now receive a FIFF grant to make her short film titled ‘A house full of women’.

FIFF is the largest film festival of Iran and is an event that celebrates cultural exchange, displays creative achievements of highly acclaimed cineastes and pays tribute to quality local and international films.

“I met 59 fellow filmmakers and friends from all around the world and bonded with them. This was one of the best things that have happened for me at the festival. I also met Paul Schrader, Luca Bigazzi and meeting Romanian filmmaker Adina Pintilie is my most memorable moment,” shared Tribeny.