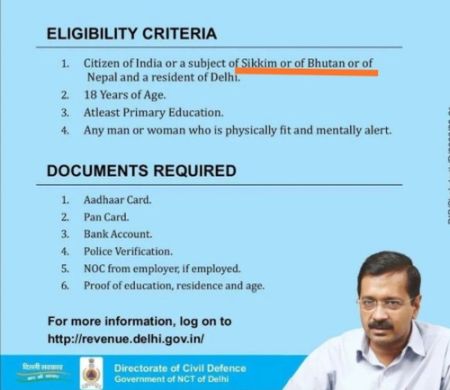 
Sikkim Subject is a contentious issue. A major controversy broke out yesterday, indirectly relating to it, after Arvind Kejriwal led Delhi Government published an advertisement calling for Volunteers to join the Civil Defence Corps.

In the advertisement, the eligibility criteria for applicant is mentioned as “Citizen of India or a subject of Sikkim or of Bhutan or of Nepal and a resident of Delhi”. Arvind Kejriwal later apologized for the goof-up, but the damage had already been done.

Protesting against the advertisement, PS Golay, Chief Minister of Sikkim, tweeted “This advertisement published by the Delhi Government in various print media mentions Sikkim along with countries like Bhutan and Nepal. Sikkim has been a part of India since 1975 and celebrated the State Day just a week ago.”

He further added, “Sikkim is a part of India and should this is condemnable and I would request the Delhi Government to rectify this issue.”

As the news gained more popularity over social media, the Lieutenant Governor of Delhi stated there will be Zero tolerance for such gross misconduct and directed the Delhi Government to immediately withdraw the advertisement. He further stated that “A senior officer of Directorate of Civil Defence (HQ) has been suspended with immediate effect for publishing an Advertisement which disrespects the territorial integrity of India by making incorrect reference to Sikkim on the same lines as some neighbouring countries.”

As the news caught more attention in the media, many others came forward that the accusation on Arvind Kejriwal is a BJP-led attack. That similar notice was published even by the Uttar Pradesh Government in the website of UP Civil Defence.

One of the leading online media from the Northeast had cited the official website of the Directorate General Fire Services, Civil Defence & Home Guards (under MHA) and has reported that even the central government document makes the same mistake.

The mentioned news portal has uploaded The Civil Defence Regulations, 1968 (including Amendment issued vide notification G.S.R. 520, dated 6th April, 1971, and G.S.R. 382, dated 30th March, 1973). Please note the date of the amendment here, which is before Sikkim’s merger with India.

It was difficult to believe that a notification which was issued before Sikkim’s merger still held true.

We did our own little research upon some sagely advice that any notification issued by the MHA should be checked up with MHA itself before making any claims.

THE CIVIL DEFENCE ACT, 1968 uploaded in the MHA website, in its very first Chapter, Pt 1 (2), it states that the act “extends to the whole of India.” The word ‘Extends’ has a footnote which states that “1st October, 1975, vide notification No. S.O. 478(E), dated 8th September, 1975, extended and brought into force in the State of Sikkim.”

While all the outrage has been directed against the MHA for its 1968 regulation, a time when Sikkim existed independently. Every report has conveniently ignored to note the notification No. S.O. 478(E), dated 8th September, 1975, which extends the act to the State of Sikkim.

What is most baffling is the timing of this controversy. The recent skirmish between Indian and Chinese forces in Naku La and Ladakh region cannot be forgotten. More importantly, the recent publication of a ‘New Map’ by Nepal at the behest of China aimed at ruffling Indian Government cannot be ignored too. With attempts at terrorist incursions by Pakistan at its peak and repeated references to sabotaging the “Chicken Neck” region by anti-national forces, this fresh attempt to bring the contentious Sikkim Subject issue does raise certain concerns.

The subject issue is a very sensitive topic in the state, as well as its implications as enshrined in Article 371 of the our Constitution is closely watched in the rest of North East India. There are legitimate fears that those who brought up knew exactly what they were doing.

What is even more shocking, but not surprising is to see self-proclaimed ‘intellectual brigade’, from outside Sikkim leading the outrage on Social Media, with highlighted screenshots about the nationality section in the Act, but conveniently ignoring the very first Chapter of the Act as published by MHA.

One needs to be careful.

Be the first to comment on "Sikkim Subject Controversy: Ignorance or Deliberate Malice?"