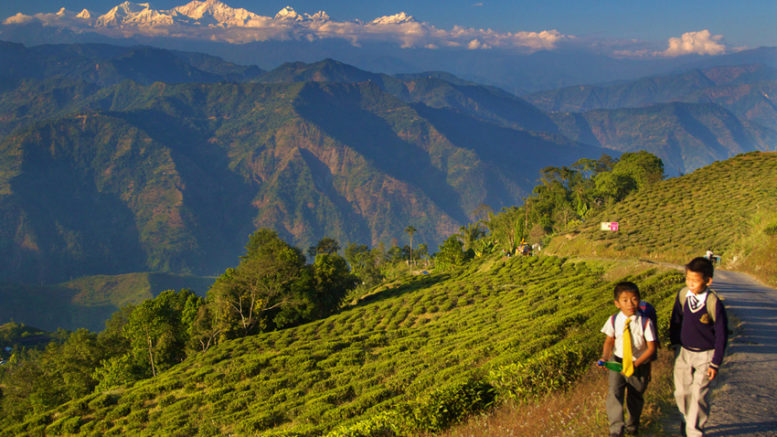 
Generations grew up, not having the luxury of travelling in taxis; generations of students became excellent men and women without having the privilege of school buses and vans. These were the generations, who had no option, but to walk, walking up and down, surrounded by greenery, breathing in the fresh mountain air, crossing rivulets and streams with a sense of physical pain yet having a tranquil soul.

No Taxi Syndicates, No ’Jhapkey Gadi’ ’or ‘Gotey Gadi’ the only means of travel was ‘Dui Khuttey Gadi’. While walking, the quickest route to the bazaar or to one’s home was the road everyone fondly called “Chor Batoo”. A short- cut, rough, narrow and slippery track, cutting through dense tea bushes and foliage, crisscrossing the main path.

Walking these ‘Chor Bato’ was by no means an easy feat, a small wrong-footed step meant that the one walking would fall flat ‘plittai’ landing very hard on the bum. The victim would soon realize that apart from the pain there would be an equally beautiful ‘Hilo’ painting on the backside. No doubt, ‘Chor- Batoo’ made the destination much shorter, but the path fostered an unwanted love affair between the enchantress ‘KUROO’ playing a double game of love affair between with the lower half of trousers and the socks. Getting rid of the ‘kuro’ one by one was a slow and boring process.

Huffing and puffing after a long walk, a sight to behold came nearer and nearer; the resting place people called ‘Chawtara’. A place constructed by some kindred soul in the memory of their departed loved ones, usually located near a prime location where people would love to rest, sometimes shaded under a ‘Banyan tree and sometimes near a ‘natural spring’.

Chawtara was not just a resting place, for the bygone generation but also a waiting and dating place for love lorn couples. “Bhare school bata pharkinda, tala bar-pipal ko Chawtara ma timilai parkinchu la’ shyly the teenaged boy would tell the girl. A shy nod would seal the deal.

In close proximity there would be a ‘Dhara’, a perennial natural spring with a short slit bamboo Spout, helping the water flow uninterruptedly from underground. A tired person would gulp the water with palms “ghwaat-ghwaat”. The water tasted so sweet and seemed full of energy-giving minerals that all tiredness and the pain of walking just vanished in an instant. How many have had such an experience? Or haven’t drunk such water in ages, how many of us miss the simple joy of reaching the ‘Chawtara’ and drinking the water?

Avoiding, face-slapping leaves of ‘Amlisho’ as it gave a nasty cut, people carefully walked through narrow tracks, while in winters from the same ‘Amlisho’ people gathered enough ‘kuccho’ going back home, that no one had to buy brooms. Whenever one encountered a bridge over the stream, people plucked and offered ‘Titopati’ leaves, placing it on the edges and prayed with eyes closed and hands folded. Parents went a step further and placed the ‘Titopati’ in theirs as well as the children’s ears! Saying it would ward off evil spirits. Would love to understand how this practice came into being and what would be the reason for it?

Rich, poor everyone walked and almost everyone carried a set of shoe inside their ‘jhola, preferring to walk in chappals, so that the shoes didn’t get wet and dirty before one reached the bazaar. Some even carried their dress to wear just a few meters away from the market. The ‘Chawtara here played the part of a changing and a makeup room. After washing their hands and feet in the ‘Dhara’ people took out their carefully wrapped clothes and shoes from inside their jhola and with a little bit of make-up dressed as if they haven’t walked at all. Such were the times.

Testing times those were, yet full of everlasting sweet memories, painful yet all the pain vanished by the smell of the pines and the sweet water, the sound of the flowing stream, the smell of the soil. Who wouldn’t want to go back in time and steal a moment from that time enjoying the underrated, unadulterated pleasures of ‘Life’ on the now-forgotten unused roads of my hills.

1 Comment on "Walking Down the Forgotten Roads of my Hills"