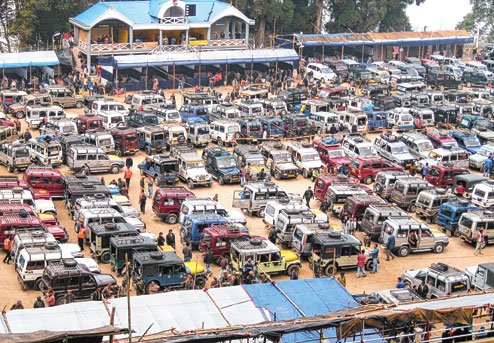 It is no coincide to write something so commonly and regularly practised in every public department in our country that put common people in trouble. However, it is indeed important to express in writing whatever had happened even when we know that nothing will change. Hence, I feel it is worth to write and tell before public about how common people get harassed systematically. This is a systemic harassment where one will leave with no option to protest and raise a voice because one need agency to speak. Nevertheless, let me briefly narrate the incident happened today with people coming to get done with their vehicle driving trial test mostly for “final test for driving licence” and “fitness report”.

At the outset let me be honest that I was amazed and happy to hear that motor vehicle department has stopped issuing a driving licence without having done with the final test of driving. Or in other words, one has to go for the final trial test before getting his/her driving licence. It is, in fact, good to see the progressive effort made by MVD to build efficient institutions in Darjeeling because getting a driving licence was as easy as getting pizza delivered at home (unless you have money and good network with so-called “agents”). However, the irony is that the rule got to change in paper only and not in practice. Anyways, after being done with the biometric test, we were being told to go for trial on next day at Children Park ground in Lebong (commonly known as golai ground) with our own vehicle at 2:00 pm (sharp). Even the notice pasted in front of MVD clearly mentioned the days and time of the trial. Without any delay, we managed to reach the venue by 1:00 pm and waited for trial to begin at 2:30 pm if not at 2:00 pm (Indian standard time). Sadly, there was no any sign of a trial getting started even at 3:00 pm and no any official representative of MVD was present at the venue to inform whether they will take a trial or not on that day. As our anxiety level rises we tried to call some of the known people in MVD whose phone always go unanswered. Somehow we managed to get information that “he will come” but nobody knows “when he will come” and I didn’t even know whom they mean by “he”. Nonetheless, it gave us the atmosphere of hope to wait for some more time at least till 4:00 pm. Finally, it was 4:00 pm in the evening and nobody appeared at the venue and it was really hard to convince oneself that “come on Monday again”.

The point, however, is not to show in any case that I am being harassed (of course, I was harassed with such systematic inefficiency) but more than us people coming from such a far distance to get their work done but have to go with nothing productive was more harassed. Among many who came for similar trial, there was one taxi driver who came all the way travelling 25kms sacrificing his one-day earning and it was really painful to see people returning with bitter words for our public servant. Can public department in our society be little responsible towards its public from whose tax they draw their salary? It is not only your time that is precious, everyone’s time is precious in their own way. If we were being given a different date for the trial when Department can manage to send their representative, we could have used our day into something else, he couldn’t have to sacrifice his one-day earning or at least we could have been informed early so that we couldn’t have to wait.

Gorkhaland 2017 : Tracing the Footprints from Tranquility to Turbulence

Be the first to comment on "“Everyone’s Time is Valuable Not Only Yours’”: Harassment to Public by Motor Vehicle Department"