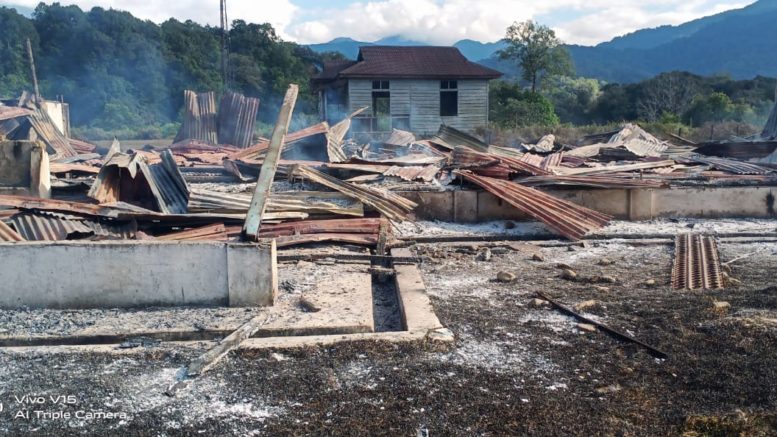 In a recently reported incident, the ex-army families in Vijaynagar, Arunachal Pradesh, most of them Gorkhas, have been served eviction notice by All Yobin Student’s Union. Vijaynagar is the remote easternmost frontier of India in Arunachal Pradesh. Ironically, the settlers in Vijaynagar are retired army personnel, who were forcefully sent by the Government of India in the 1960s to occupy the territory so that India can stake its claim over this uninhabited land.

Today, the ex-army families have been served an ultimatum to leave the place by the Lisu (Yobin) Students body. The Lisu people span over territories of China, Myanmar, Thailand and claim this region as their ancestral lands. People of the Lisu community who are on the Indian side identify themselves as Yobin tribe, and have also been accorded ST status by the Government of Arunachal Pradesh only in 2018, which is yet to be ratified by the Union Parliament. Records show that Yobins too have come and settled in Vijaynagar, after the Gorkha ex-army families started to live there.

The Lisu people resent the ex-army settlers in Vijaynagar, who are mostly Gorkhas and have long been demanding that the Government resettle them elsewhere, so they can have their rightful claim over their ancestral land. This resentment against the ex-army families have led to frequent clashes and animosity between the Gorkhas and the Lisu people.

What is the contention?

This time, the reason was the announcement of the Panchayat elections in which a Gorkha lady was nominated for the post of Zilla Parishad Member by the ruling BJP party.

The Lisu/Yobin students body announced their protest against participation of non-tribal and non-indigenous people in the panchayat and municipal elections. Giving in to the pressure, the Government has deferred the polls in Vijaynagar, scheduled to be held on December 22 across the state.

The 500-odd strong mob, armed with daggers and sticks, burnt down government buildings including the Extra Assistant Commissioner’s (EAC) office, post-office, and also ransacked the local police station. Yesterday, on the 14th of December, the local media reported that 24 people have been arrested and four firearms seized in connection with the incidents.

On the 12th of November, the Lisu/Yobin students body had issued threatening ultimatum which was widely circulated in the media ordering the authorities to “take away the settlers from Vijaynagar Circle within 10th December at any cost. Otherwise, we will have to handle the settlers’ problem by our own standards that too without any delay, and within a week.” The language used is terrifying, and if the recent violence is any indication of the ‘their own standards’, it is outright criminal. 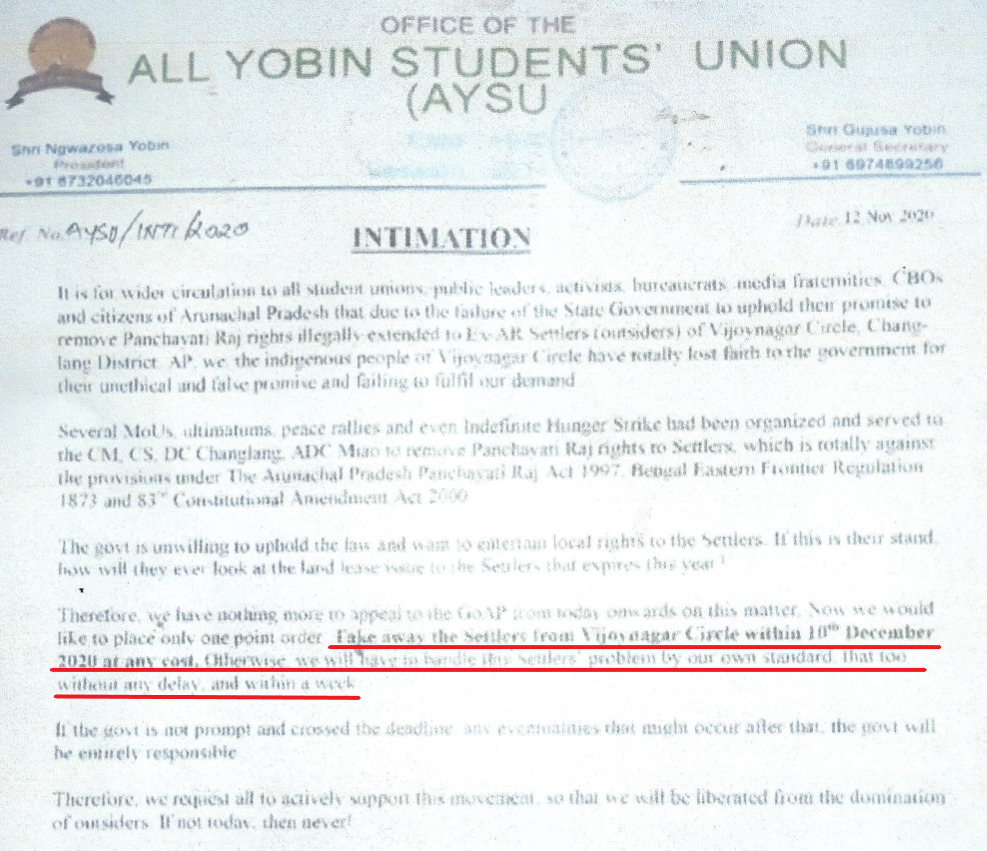 The real contention here is the issue of granting of Schedule Tribes status to the Gorkhas of Vijaynagar, which subsequent governments have promised umpteen times.

Succumbing to the pressure, the state government backed out and dropped all discussions on the PRC issue.

The Union Government Must Speak

As per the website of Vijaynagar All Settlers’ Welfare Association, the settlement of 200 families of Assam Rifles in virgin unoccupied, un-administered and remote border area (Vijaynagar) began under planned scheme of India, vide Letter No 210(11)/63 NI dated 22nd January 1964 (Annexure 2).

At the time, 200 families of Assam Rifles, almost all of them Gorkhas, belonging mostly to General Duty rank were sent to the hostile and inaccessible Vijaynagar ‘on line of duty’ in 4 batches and thereby grouped into 9 villages. The settlement was carried out till 1970-71 followed by demarcation of Indo-Myanmar International Border in this sector.

So, if the settlers were sent there officially by the Government of India for a purpose, is it then okay for a student body to threaten uprooting a whole community?

Is the Union Government aware that this is happening and planning to resettle the ex-army families elsewhere?

The case of the Gorkhas of Vijaynagar is different from other Non-APSTs as they did not come to this area by chance. The Ex-Assam Rifle families were forced by the then Government of India to settle in the area.

If not for these ex-army settlers, India could never have laid its claim on this unoccupied territory, it was certain that Myanmar would have made their claim on the area as a contiguous territory of Kachin state.

For India, vacating the army settlers from the region could also lead to a disaster as the Lisu people live on both sides of the demarcated boundary and share the close cultural relations with one another.

The BJP party, which is currently in power at the Centre proudly wears its nationalistic ideology as a crown and has never shied away from praising the Gorkhas and their sacrifices publicly. The Gorkha people, known for their contribution to our nation’s defence forces, has time and again used by political powers of the nation as an example of patriotism and sacrifice. At the national level, the present BJP Government’s ‘nation first’ idea has won the hearts and support of the Gorkhas living across India.

Ironically however, the Gorkhas in BJP-ruled states seem to be having trouble with the safety and security. Last year, it was the Gorkhas of Assam who suffered during the NRC exercise in the state. With a history of over 200 years and immense contributions in the process of its nation-building are still hoping that the Government will consider their request to be included under the ‘Original Inhabitant’ lists.

During the NRC exercise, many Gorkha families of freedom fighters and eminent people were left out and risk losing their voting rights, while others are still working on impressing the government to provide them the same rights and privileges at par with other citizens. Here too, the BJP ministers and leaders have not stopped giving their assurances to the Gorkhas, despite implementing the rules otherwise.

In Arunachal Pradesh today, the BJP Government has repeatedly given the assurances about providing permanent settlement to the Gorkhas of Vijaynagar and even announced of ‘New Year Gifts’. The case of Vijaynagar Gorkhas is different from other communities as they have been settled by the Government of India and sent on the ‘line of duty’ even for the retired soldiers. Such harassment of the retired soldiers and their families is unwarranted and the inaction of the State and Union Government towards providing security and safety to the settlers only reflects the lack of seriousness and insensitivity of the Governments.

In Darjeeling, Terai, and Dooars region, the apathy of the BJP party towards resolving the long pending demands of the Gorkhas, even after having mentioned in their Election Manifesto has forced the Gorkha Janmukti Morcha, one of NDA’s oldest member to quit the alliance with BJP.

If at all these are any indication of BJP’s commitment towards the Gorkhas, it is perhaps time that the community starts building its own strategy and seek new alliances.

DEVOID OF SELF-RESPECT: Gorkha Social Figures Bringing Shame to Themselves and to Us