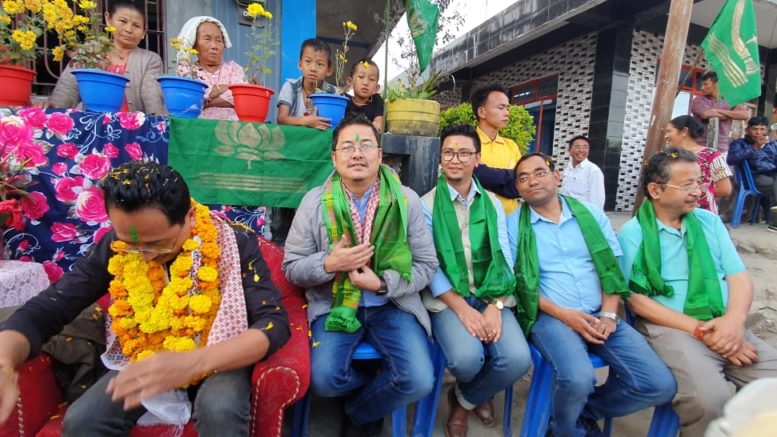 
Politics and Political Activism in Darjeeling is Taking a Strange Turn. GNLF Stands Against Grassroots Democracy. In the last few Days, Gorkha Politics is Abuzz with the Issue of Panchayati Raj

To put this in context, our MP Shri Raju Bista has placed a demand for the implementation of the 3 tier Panchayati Raj system in Darjeeling by an amendment of Article 243 M (3).

Very recently, Mr Gautam Deb spoke about Gorkhas being forced to leave Darjeeling Tarai and Dooars if NRC is implemented. Perhaps the GNLF can throw some light on this issue. Furthermore, the Article in question, 243 M(3) has validity within the jurisdiction of DGHC and DGHC does not exist anymore which automatically invalidates Article 243 M (3). In the absence of DGHC, this Article does not hold any worth. It only took one simple sentence in the GTA Agreement to make DGHC null and void. This in itself reflects the constitutional insignificance of DGHC and the doublespeak of GNLF’s belief that DGHC was constitutional in character. Clause (b) of the said Article which says “Shall be construed to affect the functions and powers of the Darjeeling Gorkha Hill Council constituted under such law.” makes it clear that the Clause (a), which says “Relating to Panchayats at the district level shall apply to the hill areas of the District of Darjeeling in the State of West Bengal for which Darjeeling Gorkha Hill Council exists under any law for the time being in force;” which Mr Zimba is trying to sell to our innocent folks, is only to give meaning to the functions and powers of DGHC. It would be enlightening to hear Mr Zimba’s clarification on his patently false statement on Panchayati Institutions in Darjeeling.

Why is he adamant to have either the one or two-tier Panchayati System than the three-tier, which is more powerful and beneficial to the region. His position and by default the GNLF’s position points to the historicity of their ideology. They signed the tripartite agreement for the creation of DGHC. It was no bigger in scope and functioning than the Zilla Parishad, the highest tier of the three-tier system. DGHC being equivalent to Zilla Parishad, they did not want another system in place that could undermine the authority and monopoly of DGHC. On page 2 of the letter submitted to the MP, the GNLF states that “Article 243 M (3) was incorporated into the Indian Constitution in the year 1992 as per thev73rd Constitutional Amendment Act with the view to enable the erstwhile DGHC”. Are you than insisting that no amendment should take place to Article 243 M (3) to preserve the legacy of DGHC and the ‘achievement’ of Late Shri Subash Ghising at the cost of people’s well being and aspirations? If this is not true then why did you not consider adhering to the 73rd and 74th Amendments of the Constitution that was hailed as revolutionary with regards to local self-governance? Part IX of the 73rd Constitutional Amendment Act states “provides for a 3 tier Panchayat system, which would be constituted in every state at the village level, intermediate level, and district level.”

When the Act says three-tier, why did you choose and still insist on one or two-tier Panchayati system? It would be good that GNLF understands and accept that DGHC is repealed and look forward to the creation of Gorkhaland rather than becoming victims of their self created myths and nostalgia.

Further, the letter submitted by GNLF to the MP says “that the incorporation of Article 243 M(3) in the Constitution finds its basis on various important government documents and records relating to the administration of Scheduled and Tribal Areas which hitherto existed as Partially Excluded and Excluded Area respectively under British rule.” If you say this is important then why did GNLF not force or negotiate with the governments at the Centre and State to implement The Provisions of the Panchayat (Extension to the Scheduled Areas) Act 1996, Clause 4(a) of which states “a state legislation on the Panchayats that may be made shall be in consonance with customary law, social and religious practices and traditional management practices of community resources”. If GNLF had done this today it would have been easier to achieve Gorkhaland. But this would put the state in a disadvantageous position, therefore, the lack of agency on the part of GNLF.

Another pertinent question to GNLF and their spokesperson is that during the 1986 agitation the focus was the inclusion of Siliguri in and its importance for the state of Gorkhaland, but why did Subash Ghising choose to leave it outside the purview of DGHC? By agreeing to the one-tier system, Siliguri permanently was lost. When the time has come to rectify this mistake why are they making misplaced statements?

Another interesting fact is that, that Mr Zimba in one of his recent interviews says permanent political solution also means implementing sixth scheduled status to Darjeeling. But isn’t our goal to be separated from Bengal? Does the sixth schedule ensure our separation from Bengal? Let me tell the GNLF that on 25 November 2007, Buddhadev Bhattacharya, the then Chief Minister said: “if the Sixth Schedule is extended to the hill areas of Darjeeling, then, it will become a part of West Bengal forever.” Does Mr Zimba want to be part of West Bengal forever? I am sure he doesn’t. One of Bharatiya Gorkha Parishang’s publication notes that Sixth Schedule was thought off for the purpose of ending the demand of the people of Darjeeling and that Sixth Schedule was no different than DGHC in the exercise of functions and powers. So why is GNLF making so much noise regarding the credibility of the Sixth Schedule?

One tier Panchayati System in Darjeeling, Siliguri not being part of us, and the Sixth Schedule Status only helps the state of Bengal in strengthening it’s strangled hold over Gorkhaland. Why is Mr Zimba arguing in favour of arrangements that help the State and is clearly against Gorkhas and Gorkhaland?

There are many questions to ask. However, it is pertinent to understand that in the absence of Bimal Gurung, political actors are trying to make themselves relevant in the Hills, Tarai and Dooars. But we can clearly see that, in the present situation, these actors cannot act against and without the benevolence of the Bengal government.