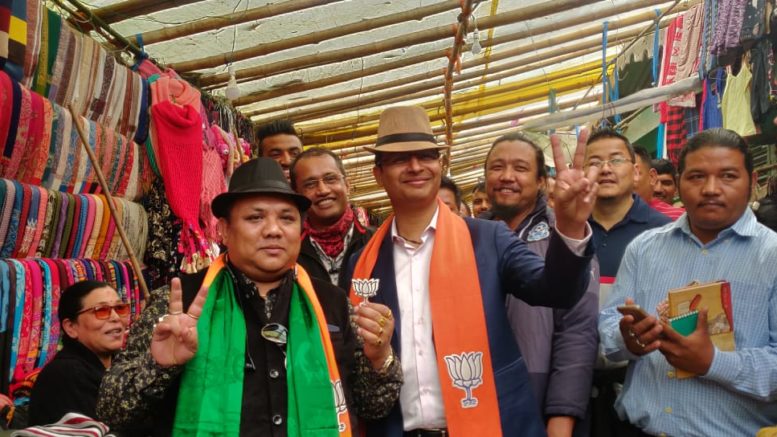 
Article 243m(3) has created a mini storm in the political circle of our hills. It deals with keeping three-tier panchayat governance. The father of our nation Gandhiji once said, “Panchayat Raj represents true democracy realized. We would regard the humblest and the lowest Indian as being equally the rules of India with the tallest in the land.” He had envisioned Ram Rajya through village republics where real freedom began through self-reliance and people’s participation in self-governance.

As an exemplary model of devolution of power to the grass-root level, the Panchayat Raj system in the country came into force, after many years of deliberations through various commissions, by the 73rd constitutional amendment in 1992. However, such an ideal model of self-governance has found no takers in the Darjeeling Hills after the dissolution of Zilla Parishad in the immediate aftermath of DGHC Accord of 1988.

The formation of DGHC under state act has replaced the Zilla Parishad which could have constitutional benefits of Panchayat Raj system and ironically transferring the constitutional privileges to much smaller Siliguri subdivision that continues to enjoy the benefits of a full-fledged district to this day.

Even today many of his party activists say GTA is unconstitutional but DGHC is constitutional, when both the bodies were set up under the state act. The incorporation of art 243m3(a) in the constitution of the country merely says that “nothing in this part relating to Panchayat at the district level shall apply to the hill areas of Darjeeling district in West Bengal for which DGHC exists under any law for the time being in force.” It is more a clause of an exception than the inclusion of Darjeeling Hills in the constitution in the manner we pretend to accept.

How does this clause of exception become the “kipat” or homeland of the Indian Gorkhas, how does it confer the “Khaitan” or title deed to the Darjeeling Gorkhas when more than 80% of Darjeeling Hills population do not possess the land rights that have real practical value in governance. For that matter, can anyone approach bank quoting the article 243m(3) to obtain loans saying it is our security?

In a letter dated 24 Nov 19 addressed to Mr Raju Bista, MP, President of GNLF party, Mr Maan Ghishing had stressed the importance of preserving 243m(3), saying amending it would snatch the power of local development agency that is at par with the power given to scheduled areas and tribal areas, he also highlighted the fact that article 243m(3) bestows recognition of the historical background and provides special protective shield to Darjeeling, all bearing the hallmarks of Mr Neeraj Zimba’s utopian concept, an incumbent BJP MLA from Darjeeling. Now it is anybody’s guess to understand the power bestowed to the local development agency by this article, actually, it is antithetical since it deprives the constitutional rights of local self-governance to the hill populace. Hence the massive outrage against the council for having miserably failed in fulfilling the aspirations of hill people, against the cub which could never grow up to become a mature fierce tiger that late Ghising had once hoped for. After all, the mother of the cub was state government and not the union government.

So why did the cub die?

Mr Ghishing played identity politics well but ignored the economics, for man does not live by bread alone and the blurred identity given by the DGHC is no staple diet. DGHC was at the mercy of state and centre for funds, when the Panchayat system could have got from the Consolidated Fund of India and Finance Commission as constitutional privileges. Economics is very important in politics, still, roti kapda makaan form the basis of our underdeveloped society. So this article 243m(3) simply acted as a shield against the constitutional source of funds, making the council begging bowl of the proud Hill Gorkhas who have to run around Delhi and Kolkata for funds, thereby perpetuating their dominance over hills.

Apart from MNREGA, old pension schemes and Housing schemes, hill people have not tasted the fruits of the Panchayat system. People should inquire about the funds, rural development schemes implemented in the Siliguri Mahakuma Parishad areas and compare with the hill areas to arrive at the clear picture of the benefits of the Panchayat system. No wonder, the union government has made rules under the Panchayat Extension to the Scheduled Areas Act, 1996 to extend the constitutional benefits of Panchayat system to the scheduled areas too, and here we have leaders who glorify the pseudo scheduled areas under article 243m(3) as a figment of their imagination.

Again with the repealing of DGHC by the GTA Act of 2011, the article 243m(3) should have been amended at the time of commencement of GTA Act only, since GTA tripartite agreement had a clause of conducting three-tier panchayat election in the Darjeeling Hills. Article 243m(3) says only about the exception that panchayat is inapplicable in DGHC area as is the case in Manipur where district council exists. For all intent and purposes, it is supposed to not interfere with the powers and functions of these councils where they exist else their raison detre would be nullified. On the same ground, panchayat is not extended to scheduled areas and tribal areas which are governed under Fifth and Sixth schedule. However, the enactment of the PESA Act, 1996 has begun to apply the panchayat system with modifications in those areas. Now to presume on a negative connotation that this clause of exception lends constitutional validity to DGHC is illogical and delusional.

Actually Gandhiji’s vision of giving power to village people to rule themselves was a masterstroke in addressing the governance issues in complex Indian federalism. As regards the question of identity, it requires serious deliberations that would involve all stakeholders, in the light of political dynamics that exist between the state and centre for we have a government at the centre who puts the nation first. All the hills political parties, civil societies, organisations should work out to give a new shape to the existing council in the light of amendment of anti-development article 243m(3) and dovetailed to this could the permanent political solution might appear in the politically chronic troubled Darjeeling Hills.