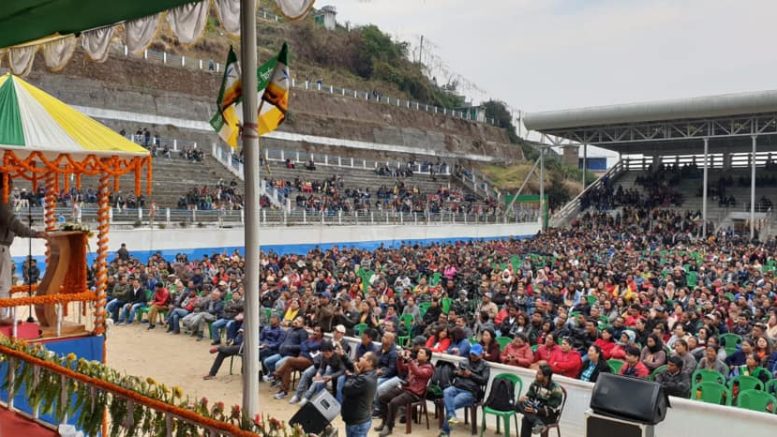 
Darjeeling is going to the Loksabha Polls on May 18 2019. The election fever has seriously hit the floors of Darjeeling Hills. All the major political parties have set their own blitzkrieg. This election is going to be very different than the other elections which Darjeeling has witnessed till to date. In the past elections, the contest used to be one sided and the results were predictable.

The national party with whom the ruling party of the hills forge an alliance used to defeat the other party candidates with a huge margin. 105 days of illogical strike, economic slowdown, fragmentation of G.J.M.M (Gorkha Janmukti Morcha) and identity crisis are the parameters that will decide the the elections output.

Gorkha Nationalism and The Power Paradox

The anti-incumbency factor of G.N.L.F (Gorkha National Liberation Front) and the identity crisis sentiments dethroned the G.N.L.F supremo Subhash Ghising resulting the emergence of Bimal Gurung as the undisputed leader of the Gorkhas. People of the hills overwhelmingly supported his ideas and his apple polished rhetoric. The Gorkhaland movement spearheaded by him touched the pinnacle in a very short span of time. The pomposity of the movement cannot be simply measured in terms of engineered vocabulary (Gorkhaland vayena vane goli nidhar MA Thokchu) and artificial sentence instead is measured by the output.

The formation of GTA (Gorkhaland Territorial Administration) or can be said as the output of the statehood movement (led by Gurung) dwindled down the aspiration of the Common people. The GTA agreement signed at the cost of martyrs (sibchu Incident) and the post of Chief Executive of GTA projected him as a man of questionable character. No sooner or later he became the victim of Power Paradox. The opposition parties also had to follow his diktats. The right to freedom of expression (Art.19) was seriously violated even not allowing the media to criticise his idea (shutdown of HPC kalimpong). It is often said that Democracy does not thrives in a small place.,in the form of democracy autocracy will prevail. To criticise him was not only an offence but used to be treated as the horrendous act. Gorkha Nationalism ,the feelings and the sentiments that bind all the Indian Gorkhas was misinterpreted and falsely propagated just for his political gains. To criticise him was to be an anti-Gorkha(some still thinks) and a traitor. The concept of Gorkhaland has emerged from the feeling of oneness and the Gorkha nationalism, rather than by the head to head collision of power paradox and egocentric desires.

The Movement that started due to the forceful imposition of the Bengali language again turned into a massive statehood Movement. Strikes were declared and The leader who was spearheading the movement (however the cause is not statehood but the auditing of GTA funds) absconded. The innocent people of the hill who protesting on the roads have had to face the wrath of the State Govt. The movement got a different shape due to the emancipation of the Gorkhas residing in every corner of the world. The reality is very hard to digest, the people who were providing an impetus to the people of Darjeeling hills from outside knew very less about the ground realities. Disorderness and tranquility destroyed the livelihood of the common people . Tea Garden workers whose economic status is very low suffered very badly. The Central Govt. refrained from the main scene and allowed it to become a rigmarole. Split of GJMM. In the absence of Gurung ,Binay Tamang (Asst.General Secretary) took the leadership and spearheaded the movement.

The sufferings of the people, deviation of the central Govt. Rate of increase of the martyrs mounted enormous pressure on the leadership of Tamang. The State Govt. on a plea submitted by the G.N.L.F party for the reinstoration of peace in the hills called an all party meeting (hills). The state Govt. is very rigid and adamant regarding the division of Bengal. Binay Tamang led the delegation as Gurung was still under the hibernation and was slapped with many non-bailable charges including Ant-national or waging war against the state. The outcome of the meeting with the state executive was prudent. On the advice of Gurung ,Binay Tamang called off the strike. People were against this decision. The wrath of the common people were visible in the social media, electronic media,etc. Bimal Gurung in accordance of the people’s deviation from his orientation bounced back of his statement and shifted the onus on Tamang. The State Govt. In order to bring normalcy in the hills resumed GTA with some changes. Binay Tamang was chosen as the administrator to carry on the developmental activities in the hills and bring back peace and prosperity .

Pseudo-chauvinism: Binay Tamang led GJMM received the support of the people. All the major leaders who were close to Gurung also equivocally supported his candidature. The political sense of the common people in the hills has been hypnotised by the so called pseudo-chauvinists. People should understand and believe in the pragmatic sequence. It should not make any difference whom so ever will administrate G.T.A Gorkhaland resides in the heart of every Indian Gurkha’s, it doesn’t change with the colour of the flags. In order to grasp the power and fulfil self-desires Gorkhaland should not be used.

The addition equation of the GJMM(Bimal) and GNLF Who were the political rivals once has really exposed the underbelly of both leaders(Bimal G and Man G). Again same rhetoric is reverberating in the eardrums of the people. Now it is up-to the people to decide.  The upcoming election is not a war between the gorkha and antigorkha forces, instead it’s a well planned strategy to fool the common people in the name of Gorkhaland and regain the power from Tamang’s led GJMM.