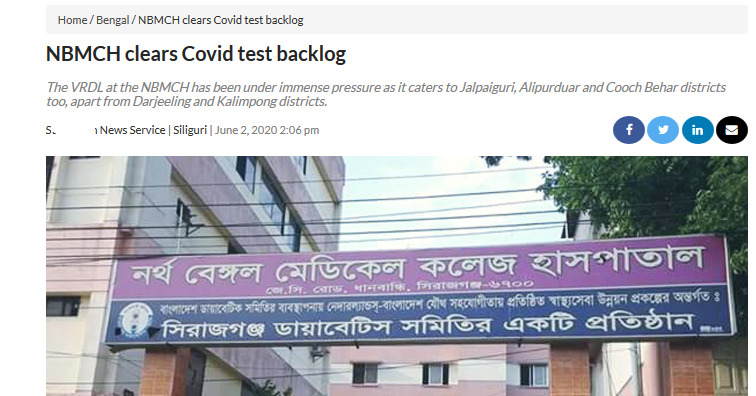 
Today, a national daily has reported that the North Bengal Medical College and Hospital (NBMCH) has cleared out all the backlog pending COVID tests. While we applaud the efforts put in by the doctors and hospital staff, we find it difficult to believe their claims.

We have earlier reported that close to 12000 samples were yet to be tested, and as of May26th, 2020. You can read our full report on that here

As we had pointed out earlier, these were the number of swabs collected till May 26th, and the number of pending tests against each district on May 26th has been shown below. These are internal Government of West Bengal figures.

Now our questions are –

How did NBMCH manage to clear the massive backlog?

What kind of RT-PCR machine are they using to do the tests? As most RT-PCR machines can conduct a maximum of around 1200-1500 tests in 24 hours. Maximum tests done at NBMCH since May 26th shows the highest number of tests conducted in a day was 1615 only. So what sorcery did they use to achieve this unique feat of clearing out 12000 plus backlog of cases, without conducting extra tests?

Till now they only have 1 RT-PCR machine.

Although the Officer on Special Duty for Covid-19 in North Bengal, Dr Susanta Kumar Roy has claimed, “We had imposed restrictions on the number (50) of swab samples to be sent by districts, and that helped us reduce the backlog. The backlog until yesterday has now been cleared, and most of the results are negative.”

May be NBMCH did manage to clear the backlog, but how, is the real question?

Did they throw away collected swabs citing one reason or other? For those who’s samples were thrown away, will they be call back for additional tests? Because everyone whose test swabs were discarded for any reason, could be potentially carrying the disease and they pose health risk to many others. We are praying to god, that is not the case.

If we are to believe our insiders, they inform us that around 4000-5000 tests are still pending.

We request NBMCH officials to come clean on the issue.

HOW DARE YOU? An Open Letter to Narendra Damodardas Modi

Be the first to comment on "NBMCH Backlog of Pending Tests Cleared – How?"