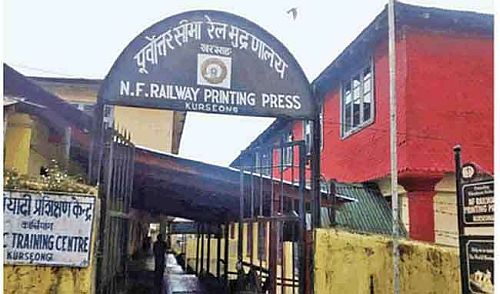 
Kurseong N F Railway Printing Press has a glorious history, not many are aware of it. Suprakash Lama a second-generation railway employee of the N.F. Railway Press, acquaint us with this amazing heritage of ours.

The word history comes from Greek historia, meaning the study of the process of social changes, a continuous, systematic, narrative of past events as relating to particular people, period, investigation, inquiry, and research, account description, written accounts of past events.

India has a long history of printing presses. India’s first printing press was set up as early as in 1674. But James Hicky, the first man introduced Printing press in India in 1780. Printing press allows us to share large amounts of information quickly. In fact, a printing press is so significant that it has come to be known as one of the most important inventions of our time. It drastically changed the way society evolved.

With the new era of development of printing presses in India, the British Government aspired and rendered a sagacious decree to establish a printing press at  Darjeeling in the first half of the 20th century, it has given the priority to be entitled the name of the printing press as Darjeeling Himalayan Railway Press which was administered by Darjeeling Himalayan Railway Co. Ltd. But after a few years of its establishment, owing to some in specified inexorable situation the D.H. Railway press was repositioned to Kurseong.

Extract a significant column of the memorandum submitted to the then Railway Minister late Lal Bahadur Shashtri on this unique occasion of his first-ever visit to this magnificent and picturesque Himalayan frontier on the 9th October’1953 and where exists the remnants of the wonderful Tin-pot railway, a class by itself without a parallel in any part of the globe.

“The printing press of the N. E. Railway at Kurseong is being extended for which a certain number of employees would be required. We earnestly urge to make  the recruitment  locally through the Darjeeling Employment Exchange in view of the fact that unemployment problem is acute in the district and here is a climate prevails which best suits only the local people under which there can be greater output than is expected from people imported from outside.”

The Printing Press at Kurseong under the administration of N. F. Railway Zone has been situated within Geographical Jurisdiction of “World Heritage” declared by UNESCO in the year of 1999.

Letter Press Printing was the form of printing at Kurseong Railway Press since its beginning.  Letterpress printing was the normal form of text from its invention by Johannes Guttenberg in the mid-15th century until the 19th century and remained in wide use for books and other uses until the second half of 20th century.

This century-old N. F. Railway Printing Press, Kurseong has had the potential for catering all the needs of N. F. Railway very successfully, it was vastly responsible for printing bulk of materials like books, forms, money-value –items i.e. Railway passes and other authentic railway documents throughout the year for entire five divisions of N.F. Railway which consists of Katihar Division, Alipurduar Division, Rangiya Division, Lumding Division and Dibrugarh Division and had also been serving 469 railway stations by catering all types of requisitions most successfully.

The development and the changes are the natural phenomenon.

With the introduction of the new era of latest printing technology, privatization as well as globalization, a new scenario came into existence. By 2005 off-set and digital printing were widely used printing techniques.

The technology of printing played a key role in the development of the Renaissance and the scientific revolution and laid the material basis for the modern knowledge-based economy and the spread of learning to the masses.

Privatization was a global trend in the late 1980s and early 1990s to reform the loss-making and inefficient public sector enterprises. Globalization was the process of integration and interaction among governments of different nations through agreements. As such, among the governments of developing countries like India, there was a hurry to adopt the new policy for the entire development of its nation. This process has effects on the environment, political systems as well as propriety and the welfare in societies around the world.

Consent to the new policy the government has to change its standing policy such as, the priority has to given to efficiency by upgrading them to get the flourishing bias in near future, it has to accept the extreme decision i.e. stoppage of new recruitment, for the time being, minimizing the staff strength, introduction of New Pension Scheme etc.

When it was learnt from a reliable source about the arbitrary order issued by the Railway Board for the merger of the Ticket Printing Section/Kurseong, N. F. Railway with the other Railways, the  All India Railway Men’s Federation, New Delhi along with the N. F. Railway Mazdoor Union, Kurseong agitated and gave its representation vide L/No.MU/C/KGN dt.06.06.2013 against the Rly. Board’s letter No.2008/RS(Ptg)/Rev.com/Action Plan dated 17.05.2013. The federation demanded that for the organizational interest of harmonious industrial relation, this move should be stalled and KGN Press should be allowed to continue its activities as usual.

SEE ALSO:  TENZING NORGAY SHERPA - The Mountain Lion, Whose Legacy Is Yet to be Honoured
Powered by Inline Related Posts

But the decision of the government has remained dogmatic and again issued Rly. Board’s L/No.2016/RS(M)DGS &D/GeM, New Delhi, dated 04.10.2017 and Board’s draft letter No.2018/RS(G)/164/8/CA-iii A. for the closure of 09 printing presses including the N. F. Railway Printing Press, Kurseong with a timeline of 06 months. Again this organization had requested the government vide it’s L/NO.NFR/MU/Misc./Kurseong dated 15.06.2018 for the continuation of this press.

In this respect, All India Railway Men’s Federation, New Delhi again had given the representation to the Ministry of Railway vide L/No. AIRF/36 dated 16.07.2018 for its continuation.

Redeployment of surplus staff of Kurseong Printing Press vide GM(P)/MLG’s letter No.E/348/MISC/KGN Printing press dt.16.11.2018 has circulated to the staff accordingly. The destiny and fortune of staff of N. F. Railway Printing Press, Kurseong would be contingent on their aspiration and optimism.

Eventually, the long unforgettable hundred year’s historical journey of N. F. Railway Printing Press, Kurseong has come to an end(?). The history has its own character and contribution, discovery, invention, creation of this universe has also its own defined chronicle which archives, abides or persevere for a long long time.

The great luminaries like Napoleon Bonaparte, Martin Luther King, Mahatma Gandhi, Saint (Mother) Teresa and Mandela left behind them unforgettable archaic fame of history, it remains as history as always ever.

“History is the version of past events that people have decided to agree upon”, Napoleon Bonaparte.

Writes: Suprakash Lama. The author of this article retired as a second-generation railway employee of the N.F. Rly Press, Kurseong. His late father Nar Bahadur Lama joined the DHR Press (as NFR Press was called then), in 1/6/1926 and rose to be the Press-In-Charge in 1/6/1946 and then Press Supervisor in 20/8/1948. He was the first Gorkha to hold the posts.

Editorial Note: Govt of India in 2019 decided that Kurseong Railway Press will be turned into a Museum.

Walking Down the Forgotten Roads of my Hills

Be the first to comment on "Kurseong N. F. Railway Printing Press – The Untold History"