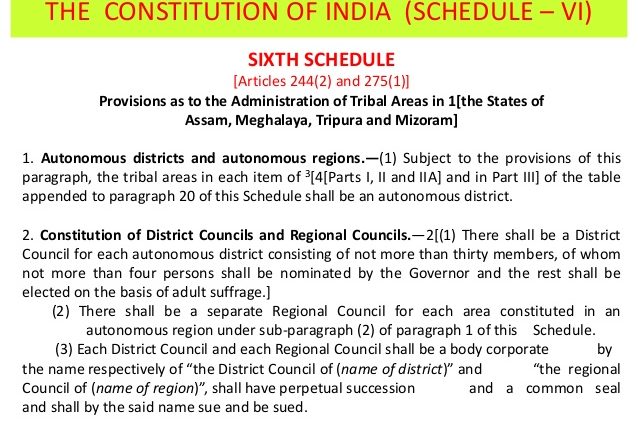 
6th Schedule of our constitution makes separate provisions for the administration of tribal areas in Assam, Meghalaya, Tripura and Mizoram. These provisions have been made in exercise of the enabling provisions given in Articles 244 (2) and 275 (1) of the Constitution. The objectives are to maintain a distinct identity and exclusiveness of tribals.

The stability and efficiency of administrative machinery will depend on the degree of autonomy that exists between its 3 wings i.e. the Legislative, Judicial and the Executive. These three wings have to co-exist symbiotically and harmoniously if the superstructure has to survive.

This schedule identifies and designates certain tribal areas as autonomous districts within the governance framework extended through the constitution of District Councils and Regional Councils. These locally elected councils are endowed with legislative, judicial, executive and financial powers.

However, several questions have been raised with respect to their autonomy. How autonomous are these Autonomous councils? Do these councils really enjoy complete legislative, judicial and financial autonomy as claimed by some or its just a paper tiger, opium for the masses? These are some of the pressing issues which I will try and address maintaining complete political neutrality and without prejudice to any political party or its spokesman. The objective of this write up is not to hurt the political sentiments of many, but to shed light and bring out facts, in a most lucid way, on provisions that pertain to the 6th schedule of our constitution.

Correct, the council is empowered to make laws on certain subjects, however, this power is subject to the powers conferred on to the Governor under Article 163. A Bill passed by the council under 6th schedule will become an Act only once the Governor gives his assent. The Governor, on the other hand, though a Central Government appointee, is bound, under Article 163, to act in accordance to the aid and advice tendered by the Council of Minister headed by the Chief Minister, which means that even if a Bill is passed by a District Council but is not agreed to by the Chief Minister, the CM can advise the Governor not to give his assent and the Governor has no option but to oblige as he is constitutionally bound to do so( Article 163). In other words, every bill passed by the council can be blocked by the CM acting indirectly through the Governor.

Again under Paragraph 15 of the 6th schedule, the CM acting through the Governor can annul or suspend any act or resolution of the District and Regional council if the said act or Resolution is likely to endanger the “safety of India” or be prejudicial to “public order”. Words like “public order” and “safety of India” are too vague, subjective and not defined in the constitution thereby giving unfettered power to the CM to suspend or annul the acts or resolutions of the District and Regional councils, which again compels us to question the legality of the council’s legislative autonomy.

Moreover, as the constitution prescribes no definite time frame within which the Governor has to give his assent to a bill passed by the council, the Governor can exercise his Pocket Veto and sit on a Bill indefinitely without expressing his mind killing the bill once and for all.

(2) The District Council has Judicial Autonomy:

Partly correct, under Paragraph 4 of the 6th schedule under the heading ” Administration of Justice in Autonomous Districts and Autonomous Regions ” the councils are empowered to constitute Village Councils and Courts for the trial of suits and cases, both civil and criminal, but only when the aggrieved parties involved are members of scheduled tribe. For a case involving a dispute between members of non-tribals the aggrieved still has to get their injury redressed through the normal hierarchy of courts starting from the District Court, which is cumbersome, time-consuming and extremely expensive beyond the reach of a common man.

Again, Sub Para 2 of Paragraph 4 of the 6th schedule empowers the Regional council, District Councils or any Court to act as ” COURTS OF APPEAL” with respect to all cases and suites triable by the Village Council or Court as the case may be, but such appeals can only be admitted with respect to disputes between members of ST. For any regular appeal from the District Court involving a non-tribal one still has to go to the High Court, in Kolkatta for relief, which again is very expensive.

The tripartite Memorandum of Settlement ( MoS) signed in 1988 specifically mentions that-all All India Service officers – IAS, IPS and Indian forest service, including the DM and the SP and all the officers of the West Bengal Government on deputation will remain outside the control of the Council. The council can only RECOMMEND suitable action against them to the state government, the recommendation being pure of non-binding nature to the state government. This means there will be 3 different class of officers in the 6th schedule Area with conflicting allegiance and accountability. At the top is the All India Service members under the control of the centre with immediate control lying with the state government, next in the hierarchy – officers of West Bengal answerable only to the State Government and finally in the lowest rank lies the officers recruited by the District Council who are responsible to the council. With the top two layers of officials totally outside the control of the District Council, I wonder how the council will manage to get its executive work done smoothly without any roadblock and red tape. To make matters worse the MoS has given the sole executive authority, including the sanctioning power to the Principal Secretary who is generally an IAS.

It’s said that the one who controls the purse controls the system. With every development project requiring the sanction of the Principal Secretary who is under the immediate control of the State Government and all funds being routed through the state government the much-hyped Financial Autonomy of the council will definitely go for a toss.

With the State government, directly or indirectly, enjoying overriding power over the Council and the council having to continuously beg for funds to the State government, it is but obvious that the much-popularised executive and financial autonomy is no different than the one we had under the erstwhile DGHC and the one we presently have under GTA ie. Status quo remains.

(4) The District Council is Inclusive with a balanced representation from all the communities.

To answer this question we need to comparatively look at the representation in terms of numbers of seats reserved for members of different communities to the total number of members in the Lok sabha, various State legislative assemblies and prevalent councils functioning under the 6th schedule.

In the case of Lok sabha, we have 47 seats reserved for ST out of a total of 545 members. Which means around 8% of seats are reserved for STs which is fairly reasonable considering their total population in India.

Now If we look at the Memorandum of Settlement that was signed between the Government of India, Government of West Bengal and GNLF on 1988, it clearly states that there will be a total of 33 elected seats in the council and 13 seats out of 33 will be reserved for the STs alone, which is a whopping 30% reservation, with ZERO or NO reservation to the members of Schedule caste. How can the proponents of 6th schedule claim that the council has a balanced representation when even a layman with scanty mathematical prowess can figure out that this council is designed specifically to promote the welfare of only one community with the total exclusion of Schedule caste? No way the council is inclusive.

The situation gets even worse in Assam. The Bodoland model which we keep on referring to in all our discourse has a total of 30 seats out of 46 reserved for STs alone, which is almost 65% seats reserved for STs and only 5 for non-tribals.

(5) A BIll passed by the District Council will be an act only when the President gives his assent.

There is this myth doing the rounds that A Bill passed by the Council will become an Act only after the President gives his assent thereby bypassing the State Government, ensuring legislative autonomy.

This again is only partly true as a closer look at sub-para 3A of paragraph 3 under the heading ” Powers of District Council and Regional Council to make laws “will reveal a different story. Sub para 3A was added by the 6th Schedule Amendment act 1995 and is applicable only to the 6th schedule areas of Assam namely North Chachar Hills and Karbi Anglong Autonomous councils. This sub-para specifically states that only those laws relating to matters in List 3 of the 7th schedule shall be submitted forthwith to the Governor who shall reserve the same for the consideration of the President.

List 3 of the 7th schedule is known as Concurrent List which includes matters on which both the Center and State Government can make laws, the legislative immunity of the 6th schedule council from the state government is therefore limited only on matters that are present in the Concurrent List and not on all matters. If any law is to make with respect to any other matters falling in any of the other two lists namely the Union and the State list, then such a bill will again require the mandatory Gubernatorial assent before becoming an Act.

(6) Income tax exemptions are given under the 6th schedule:

Partly true, under Section 10(26) of the Income Tax Act 1961, income tax exemptions are given from (1) any sources (2) by way of dividend and interest, but only to the members of ST living within the 6th schedule Area and in some North-Eastern states (like Arunachal Pradesh, Manipur, Mizoram and Tripura ) but not to non-tribals. This shows that the 6th schedule provisions definitely favour one community over the other as only members of ST are exempt from IT payment.

(7) 6th Schedule areas will get funds directly from the Central government i.e from CFI (Consolidated Fund of India).

Yes indeed, under Article 275 (1) grant in aids also know as Statutory Grants will be given by the Parliament through law, on the recommendation of the Finance Commission and charged on the Consolidated Fund of India ( CFI) but not solely for the development of the Scheduled Areas but a major chunk of the funds is given to meet the cost of schemes of development as may be undertaken by the state for the purpose of promoting the welfare of the Scheduled tribes. Which means a major percentage of the funds will be utilized for the promotion of the STs and not the area in general. Not to forget that such funds are routed via the State Government which can create numerous hurdles as had happened numerous times before with DGHC and GTA.

With a majority ( around 65% )of Darjeeling population still comprising of non-tribals (including the schedule casts) and the RGIs recent rejection to include 11 communities from Darjeeling as ST, I wonder how wise it is to vouch for an administrative setup that the constitution itself without any ambiguity, in clear and unequivocal words, in Article 244(2) defines it to be for the “Administration and Control of Tribal Areas”.

It goes without saying that Superimposing an administrative setup meant for the welfare of tribals in an area where the majority are still non-tribals and schedule castes, may just put all of us at the thin end of the wedge.

Moreover, the overriding powers enjoyed by the state government acting through the governor or officers subordinate to him, impeds and defeats the very purpose of granting Legislative, Judicial and Executive Autonomy to the councils.

GREENFIELD, GREENPLY: What’s in a Name? Everything

SBI – The Bank of the Common Man

Be the first to comment on "6th Schedule – A Panglossian Political Quick Fix or an Opium for the Masses?"