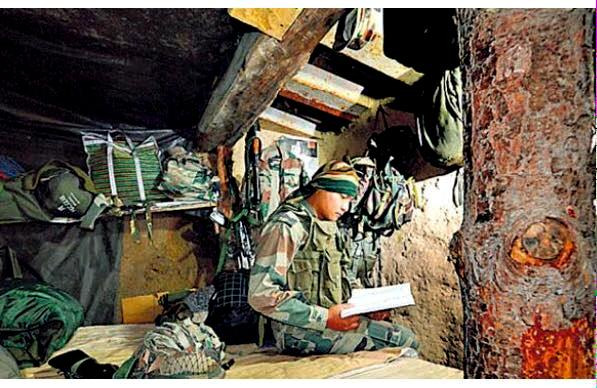 
In a bunker dug into the treacherous mountainside and fortified with iron, stone and sandbags along India’s troubled border with Pakistan, the latest issues of several general knowledge magazines are tucked under rifleman Anurag Thapa’s pillow.

Amid the frequent shelling across the border and the simmering threat of a full-blown war, the 24-year-old soldier is sneaking in study time for an exam to fulfil his dream of becoming an army officer and leading hundreds like him into battle.

The Gorkha soldier returns every night from a punishing patrol along narrow jungle trails, keeping a cautious watch on a maze of routes Pakistani infiltrators could take to sneak into India across the Line of Control in Jammu and Kashmir.

He races to remove his combat helmet, un-slings his assault rifle and grabs a copy of the Competition Success Review. “Even if I can study only for five minutes, I will. My father was a havildar, I want to return to the LoC as an officer,” says Thapa, who is preparing for a personality and intelligence interview spread over five days to enter the Dehradun-based Army Cadet College (ACC).

Soldiers are groomed to become officers at the ACC for three years before they are packed off for a one-year course at the Indian Military Academy, Dehradun, which churns out freshly-minted lieutenants.

Soldiers are groomed to become officers at the ACC for three years before they are packed off for a one-year course at the Indian Military Academy, Dehradun, which churns out freshly-minted lieutenants.

Thapa is not the only one. Riflemen Milan Gurung and Churamani Bhusal are also chasing the same dream as they battle combatants along an inflammable stretch guarded by one of the army’s largest brigades.

All three soldiers, part of the 5/4 Gorkha Rifles’ Alpha company, have cracked the written exam and are slogging away for the final Services Selection Board interview in November.

Becoming an officer will bring honour to his family and inspire other underprivileged kids in the tiny Nepal hamlet he grew up, 23-year-old Gurung says.

In the few hours they get off work, the exam hopefuls get together but watching TV is a rare luxury, allowed for only two hours daily in the bunker complex’s entertainment room.

“If I am assigned duties around that time, I try to watch it the next day to stay updated,” says Gurung, who shares a tiny bunker with eight other soldiers.

Amid the haze of conflict, Bhusal looks forward to a game of chess to sharpen his mental faculties, crucial for him to crack the upcoming tough exam. Food also uplifts their mood and the prospect of chicken curry for dinner after a gruelling day at work revs up the Gorkhas.

Positions held by the Pakistani army on the towering Kopra ridge in the Poonch sector overlook Thapa’s post, which is frequently bombarded by the enemy with mortar rounds and rockets.

Other army posts dotting the breathtaking landscape are just as vulnerable.

“Being under direct observation puts us at a disadvantage. But my boys are doing a splendid job holding ground right under the enemy’s nose,” says Colonel JV Singh, their 40-year-old commanding officer and a Shaurya Chakra awardee.

The Gorkhas know there’s no lowering their guard. “Either we kill them or we destroy their bunkers when we hit back. We don’t waste ammunition,” says Thapa.

SEE ALSO:  An Appeal: The Orphan Among the Orphans
Powered by Inline Related Posts

No one knows when a lull in hostilities will give way to full-blown conflict. “We train hard to make the enemy cower in their bunkers. They fear the Gorkhas,” says the colonel.

Lieutenant General RR Nimbhorkar, who commands the Nagrota-based 16 Corps, says the Pakistanis enjoy a clear advantage in the Poonch sector, but India’s defences are extremely robust.