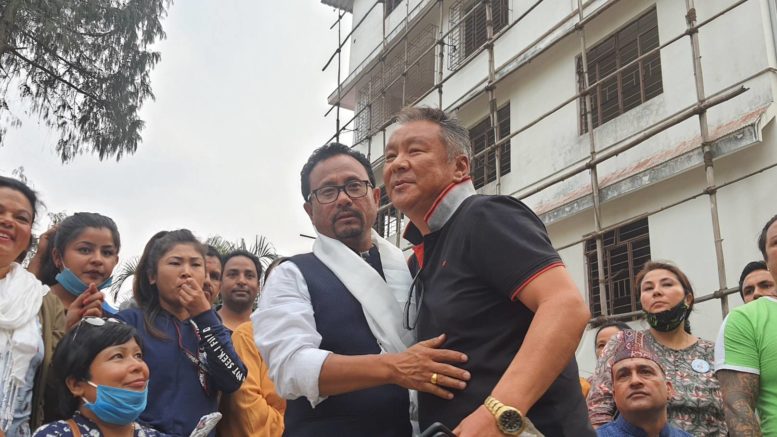 On May 2nd, the election results of around 5 states were declared. For 4 of the states, things returned to normal in no time. But it wasn’t the same for West Bengal, things weren’t the same. Here, the environment has been on a boil ever since. The news that started with vote counting was followed by the result declaration, then came victory celebrations through different parts of Bengal and then everything escalated quickly to become the news of violence and arson.

While analysing the situation across the state and the reasons behind the culture of political violence in Bengal would be an interesting exercise in itself, but here, the attempt is to discuss the recent developments in hill politics. We are fortunate that election results in the hills were followed by reactions altogether different from the rest of Bengal in emotions and discussions, however, it nowhere means that the things aren’t interesting around.

It is for the first time in many years in the Hills that the election results didn’t come as something that was pre-decided. This time around, all the major players were on the same court. No political pundit could predict the result this time. The true spirit of democracy was upheld and people expressed their mandates through their votes. Kalimpong has selected Mr. Ruden Sada Lepcha as its representative, while Mr. Neeraj Zimba and Mr. BP Bajgain got the majority of votes from Darjeeling and Kurseong respectively – a splendid display of democracy indeed.

However, what comes as a very sad surprise just after 2 days of results being declared is Kalimpong MLA elect Mr. Ruden Lepcha’s statement explaining his ‘developmental priorities and parameters’. He explicitly made it clear that he met all the necessary people inside his party and the GTA to express his decision that he would work exclusively for the booths and samastys where he had won a majority of the votes, while for those where he had lost heavily, he would keep their development work on hold. He called it as “justice of work” in terms of his service. He said that the booths where his party had won with the highest margins would get the highest priority and that he wouldn’t work for those where he lost for at least 2 years now. He further said that he would hold a talk with the executive engineer to put all the tenders on hold so an ‘adequate reconsideration for various projects according to the priorities and parameters he set’ could be made.

In the process of trying to scare or punish the voters who didn’t vote for him or reward those who did, Kalimpong MLA Mr. Ruden Lepcha seems to have forgotten the very basis and essence of democracy and governance. He seems to be unable to comprehend that him being elected as the MLA doesn’t make him the representative of just those people who voted for him, but he is supposed to represent all the people of Kalimpong Legislative Assembly constituency, regardless of who voted for him or not. I am not sure if he is aware of this, but in announcing discrimination against those places wherefrom he has polled less, he is violating his oath as a public representative, even before he has taken it. As a public representative, he is supposed to be just and unbiased to all his constituents, regardless of their race, colour, religion, caste or political affiliations.

Once elected as a public representative, one must keep the duty and responsibility of his position above one’s political agenda and affiliations. By issuing such a statement, one can only be disrespecting the values and essence of democracy and our constitution. I am not very sure from where Kalimpong MLA Mr Ruden Lepcha derived his idea of “justice” as serving people according to the votes they cast in his favour, but it is surely against the justice of unbiased service that the people deserve from their representatives.

An MLA again as a member of the Legislative Assembly is supposed to be the medium between the people and the State Government and a lawmaker. Unless Mr. Ruden Lepcha holds a deciding position in the GTA, it is difficult to understand how the projects and the tenders can be influenced by his recommendations, unless they are being sanctioned under the MLA LAD fund. Again, even if he is a key position holder in the GTA, is it how the local administrative body should function? Based on the political affiliations rather than the necessity and merit?  While the GTA is already tainted by accusations of favouring their associates for hundreds of school teacher vacancies, was it the right statement to make?

No matter who the leader or the representative is, it is the people’s money that flows into the system and onto the administrative bodies. Should the political parties and their leaders be using these taxpayers funded money to benefit their followers and voters only?

Is such mentality a reason why GTA has been such a big failure? Does Kalimpong MLA Mr. Ruden Lepcha lack an understanding of democracy or is he trying to define the same in a new way? Do his party and the leaders subscribe to the same line of thought as well?

Someone should tell him that being an MLA is not like running one of those Development Boards anymore. This is a public office he now holds, and the people and the courts will hold him responsible for each and every action or inaction of his.