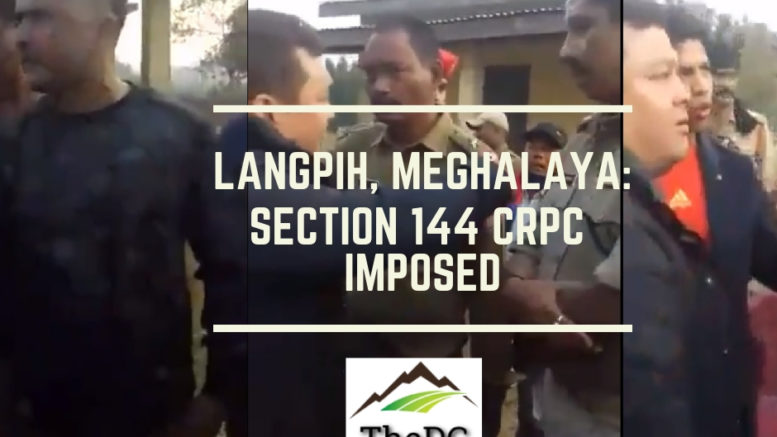 
Curfew has been imposed and Section 144, CrPC has been invoked by the local administration in Langpih, close to the disputed border area between Meghalaya and Assam. Tensions erupted over allegations of brutality and lathi-charge by Assam Police and escalated after the of Meghalaya MLA Kimfa Marbañiang to the village.

As per the reports, problems started when workers of a local firm M/S Dhar Construction began erecting electric poles in Umlai, near Langpih in preparation for a Church even next month. Assam Police, on receiving the information went to stop the construction in the dispute area and arrested two workers, following which the villagers started protesting and pelted stones at the police personnel. The police force in retaliation resorted to lathi-charge injuring several villagers.

In a complaint lodged with the Meghalaya Human Rights Commission (MHRC), the Congress legislature, Kimfa Marbañiang and a local organization Hynñiewtrep Youth Council (HYC) alleged violation of human rights and grievous assaults by Assam police. “Assam police have violated human rights by hitting the villagers including women, and there were no women police at the place of occurrence,” the MLA said.

Marbañiang, the MLA said that he visited the area after hearing of the incident on Thursday, but as he went to discuss the matter with the Assam police personnel at the location, he was confronted by residents of the area from the Gorkha (Nepali) community, who he alleged disrupted his discussion with the police. “I had a heated argument with them (Nepalee residents) because they were interrupting my discussion with the Assam police,” Marbañiang alleged.

In a video that surfaced over the social media, the MLA is seen threatening some Gorkha youths to leave the place and “Go to Nepal.” Langpih, a picturesque village bordering West Khasi Hills district of Meghalaya and Kamrup (rural) district of Assam has historically been a bone of contention between Meghalaya and Assam, with both the states staking claim over the area.

In the widely circulated video, the local youths can be heard protesting against the MLA calling them Nepali and threatening them with ‘go to Nepal.’ The agitated youths can be heard reminding the MLA about some earlier exodus of Gorkha settlers and questioning the MLA where was he at the time. Strongly protesting against the MLA calling them Nepali, the youths can be heard saying “we are Indian Gorkhas and not Nepali and this part of Langpih is Assam. You cannot threaten us to leave Langpih, we are not Nepali but Gorkha. Why did you call us Nepali? This is Assam, and we are Gorkhas.”

The Chief Minister of Meghalaya, Conrad K Sangma said that he has received information of the clash. “There were some arguments and then some stone pelting took place, then Assam police resorted to lathi-charge,” He said the Deputy Commissioner (DC) and Superintendent of Police (SP) of West Khasi Hills district have spoken to their counterparts in Assam and requested the release of the two arrested persons.

The bigger question that arises after the incident is “How could the MLA, a public representative who had gone to hold discussions with Assam Police end up in a verbal dual with local residents using unparliamentary language and derogatory remarks against a community? Whether by accident or intentionally, the MLA seems to have flared up communal tension with his caustic remarks. Such unchecked temperament and remarks can only create a sense of mistrust and of insecurity among the residents who live in the area.

Gorkhas in Assam not to be prosecuted under CAA, says Chief Minister Himanta Biswa Sharma