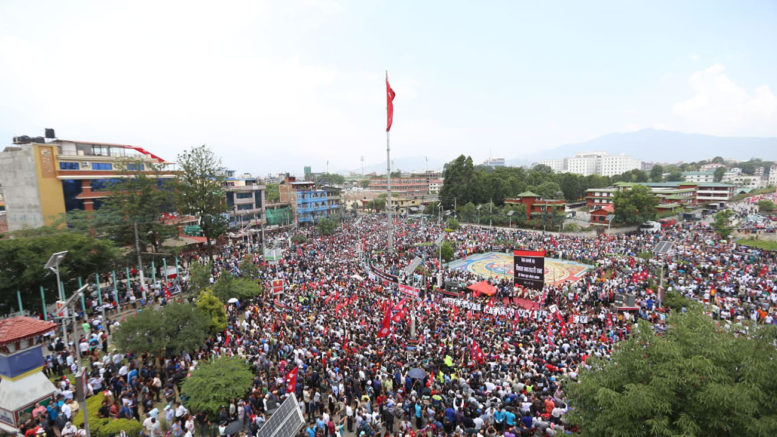 
Communist run Govt of Nepal on Tuesday withdrew a controversial bill that sought to nationalise private and public trusts meant for running the cultural activities and temple affairs following a week-long intense protests by the ethnic Newar community which feared that it could jeopardise Sanatan Hindu tradition.

The K P Sharma Oli-led Communist Party government had tabled the Guthi Bill in Parliament last week to amend the Guthi Act and nationalise both public and private guthis or trusts and regulate all religious sites under a powerful commission.

Speaking at a hurriedly called press conference on Tuesday, Minister for Land Management and Cooperatives Padma Kumari Aryal said the government has decided to withdraw the bill, which was registered in the upper house of Parliament last week.

Tuesday, lawmakers belonging to Opposition Nepali Congress had obstructed the lower house as the prime minister stepped up to address Parliament, where he was supposed to talk about the bill.

The Guthi Bill proposed repressive provisions that would nationalise both private and public guthis, regulate all religious sites and replace the Guthi Sansthan responsible or managing the religious institutions with a powerful commission.

For many, the bill was the final straw in the systematic erosion of indigenous Newar culture and rights by the state. Some critics has termed the bill as the Cultural Revolution of the Communist government.

The Ministry of Land Management and Cooperatives in a statement said it has decided to withdraw the bill from the National Assembly, citing additional need for discussions with stakeholders concerned regarding the matter.

The bill also invited sharp criticism on social media and many satirical remarks regarding the bill have become viral.

One such social media posts says: “You (communist leaders) first rented our house in Kathmandu, then snatched our daughters, then taken donation from us and also got our votes during elections and now you are eying at the ancestral properties and land of the Newar communities.”

Many senior leaders of the ruling Communist Party of Nepal married Newar girls from Kathmandu during their underground political career in the past while fighting for democratic rights.

[Update via: PTI, Thanks to our reader: Haris @TeestaNadi on Twitter, for informing us about this]