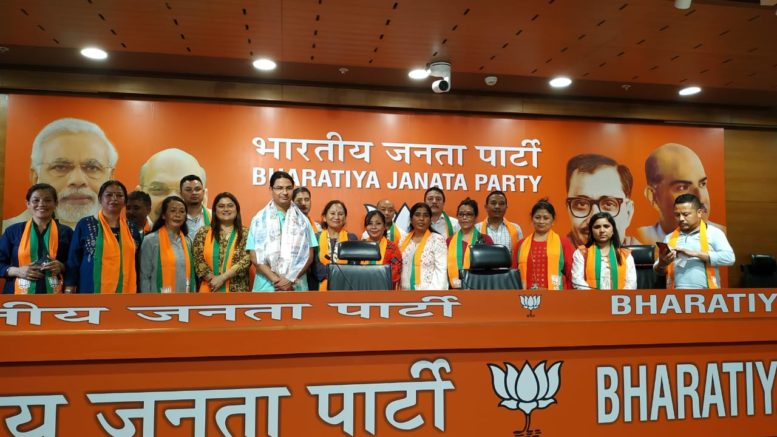 
The dissolution of Darjeeling Municipality by the West Bengal Government, before the end of its term in 2022, will intrigue even the most ardent critique of democracy, and will give serious heartburn to those who believe in the principles of constitutionalism.

The West Bengal Govt’s decision to dissolve a functioning municipality raises a number of legal, political and moral issues, and lays bare the facade of democracy from the Trinamool government has put up.

The order issued on 18th of June, 2019 vide no: 548/MA/O/C-4/1A-12/2019 Issued by the Bengal urban development and municipal affairs department, states, that “Darjeeling Municipality has been dissolved under sub-section (2) of section 431 of West Bengal Municipal Act (1993)”

Let us see what Sub-Section 2 of Section 431 of the West Bengal Municipal Act 1993 states:

It is therefore clear that implementing sub-section 2 of section 431 of the WBMA (1993) wouldn’t be possible, if sub-section 1 hasn’t been adhered to.

431. Power of the State Government to intervene in case of gross neglect or serious irregularity –

(1) If, in the opinion of the State Government, the Board of Council or has shown gross neglect in the performance of the duties imposed upon it by or under this Act or any other law for the time being in force, or has committed serious irregularities in the performance of such duties, the State Government may by order direct the Board of Council or to show cause within the period specified in the order why it shall not be dissolved on grounds of charges mentioned in this order.

So it is clear that under sub-section 2 of section 431 of the Act, in the present case of Darjeeling, that grants the government the power to dissolve the elected body if and only if it “fails to answer the charges … or if the answers do not convince the state government”.

It is both amusing and perplexing to note that in case of Darjeeling Municipality, either the West Bengal government failed to issue any “show cause” notice, as required by WBMA (1993), to the Darjeeling Municipality councilors before dissolving it, or if ever such a show cause was issued, that information was, till date, kept hidden from all the disgruntled councilors – who have quit the GJM [Binay faction] and joined BJP. The law requires the state government to “give reasonable opportunity” to the councilors to explain why they haven’t been able to function, but instead of doing so, the TMC run WB Govt has made a hideous ploy to overrun an elected body in the hills when majority of the councillors are away from Darjeeling.

Moreover, the Bengal Municipal Act must be read with provisions relating to the governance of municipalities under the Constitution of India.

Art. 243 (U) of the Constitution of India reads: “Every Municipality, unless sooner dissolved under any law for the time being in force, shall continue for five years… provided that a Municipality shall be given a reasonable opportunity of being heard before its dissolution”.

It is clear from Art 243 that while the State Govt does reserve the right to dissolve a municipality before the end of its five year term, but the Constitution requires the state to provide “a reasonable opportunity of being heard before its dissolution”, which wasn’t accorded to the hill representatives.

Beyond legal technicalities, the decision to dissolve an elected body and to pass on its administration to a government-appointed administrator raises serious political and moral questions, particularly in the case of Darjeeling hills.

Can the government that is seemingly running low on public support, as is evident from the Trinamool’s loss in Lok Sabha election, dislodge an elected body under the cover of frivolous legal provisions?

Frivolous, because the Bengal Municipal Act (1993) denies the right to challenge and to appeal any decision of the government to dissolve a municipality in the state.

Sub-section 7 of section 431 reads, “If any question arises as to what constitutes gross neglect or serious irregularity, the opinion of the State Government as recorded in the writing in the order, under this section will be final and conclusive and the same shall not be questioned in any court of law.” [sic]

In a country where the citizens can question the legality and validity of the provisions in our constitution itself, this “unquestionable authority” of the West Bengal government in deciding which municipalities can be allowed to run, and which need to be dissolved is ultra vires – and thus against the spirit of our constitution.

It is time that legal luminaries and the jurists turn their attention to dump many such untenable provisions in the Bengal government-administered laws that run contrary to the ethos of constitutionalism enshrined in our constitution.

On a broader note, the decision to dissolve Darjeeling municipality should be seen as yet another attempt of the Trinamool-govt to stifle the voice of dissent and to weaken the democratic institutions in Darjeeling hills, and to run a parallel, even if undemocratic, administration with the help of the state-appointed leaders, like in case of the present Gorkhaland Territorial Administration.

History, however, is a testimony to the fact that a government which does not respect the rights of the people is doomed to die its natural death. As Tony Blair, the ex-PM of Britain, reminds us, “Anywhere, anytime ordinary people are given the chance to choose, the choice is the same: freedom, not tyranny; democracy, not dictatorship; the rule of law, not the rule of the secret police”.

GORKHALAND EVERYDAY: The Curse of the Greens