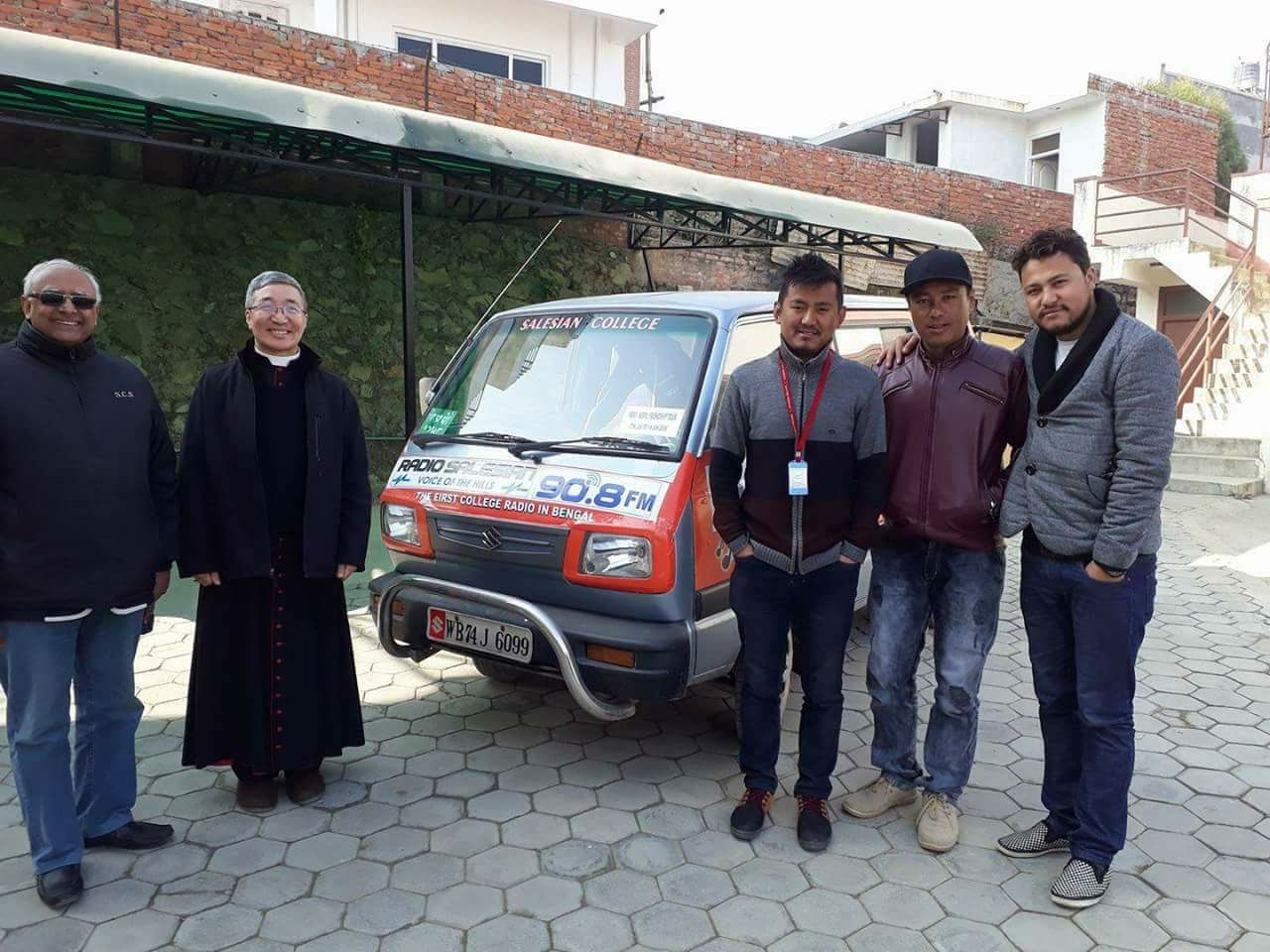 Darjeeling — How can a community radio take initiatives toward building people to people friendship between neighbouring countries? A college community radio in Darjeeling hills has shown how a small gesture at promoting understanding and fellowship through people to people initiative can go a long way to establish rapport and gain people’s goodwill.

Radio Salesian 90.8 FM, the first and only college community radio of Bengal and entire northeast India’s eight states, set out on a historic “Indo-Nepal Friendship Tour” with a team of Radio Journalists (RJ) under the patronage of Bishop Paul Simick of Kathmandu, Nepal and principal of Salesian College Sonada (SCS) Darjeeling, India Dr George Thadathil.

The tour on Radio Salesian 2005 model Maruti Omni Van was flagged off on Sunday 7th January at 7.07 am from Sonada passing through Indo-Nepal Kakravitta border near Siliguri and proceeded to Dharan from where Don Bosco Centre Nepal started and reached Kathmandu in Central Nepal.

DBSN marked its 25th year of service to the people of Nepal by handing over fifth earthquake resilient school to villagers.

A total of ten schools in remote and inaccessible areas affected by the 2015 earthquake in Nepal are being got ready to be handed over.

The radio team covered the handing over ceremony of the fifth school which took place on January 11 at Kallery Basic School in Sindhupulchawk district in central Nepal some 90 kilometres east of Kathmandu.

One of the most successful learning interaction during the trip was with the founder director of the first community radio set up in South Asia, Radio Sagarmatha Nepal, Dr Raghu Mainali.

After an extensive exchange of community radio programming, planning and strategizing toward a sustainability model, Dr Mainali gifted the visitors with 13 rare books on community radio, among them 4 books are in the Nepali language.

Dr Mainali also gave the visitors a guided tour of the recently constructed earthquake resilient studio and granted permission to use their Nepali language radio serials on health, disaster preparedness, and radio plays.

The team also visited plus two (senior secondary) schools along the way – 7 schools in Dharan, 6 in Biratnagar and 2 in Kathmandu) to promote higher education in Salesian College Darjeeling and Siliguri campus.

Radio Journalist Mr Chhetri adds, “We also made radio programs on 25 years of NDBS and interact with mission pioneers and Church leaders.”

Time spent with tour patron Bishop Paul Simmick of Kathmandu, Nepal, a priest from Indian diocese of Darjeeling, too was most fruitful as the team interviewed him for a radio program on experiences of living in a foreign country and working for people of similar culture and language.

The history of NDBS began in 1992 with Dharan centre, in eastern Nepal, initiated by late Fr George Alakulam who ventured out from Don Bosco School Mirik then under the care of SCS.

The Salesians then reached Sirsia (1996), followed by the capital, Kathmandu, with two centers – in Lubhu, established in 1996, and Thecho in 2001 – after which came Baroul and Chakkarghatty (2014) East Nepal and, finally, Biratnagar in 2017 for a total of seven houses, managed today by 18 Salesians from various states around India.

The silver jubilee celebrations (1992-2017) were celebrated on 11 November 2017 at Don Bosco School Biratnagar.

They also run a number of social programs, such as scholarships for students and emergency response projects like the aftermath of the tragic earthquakes of 2015.