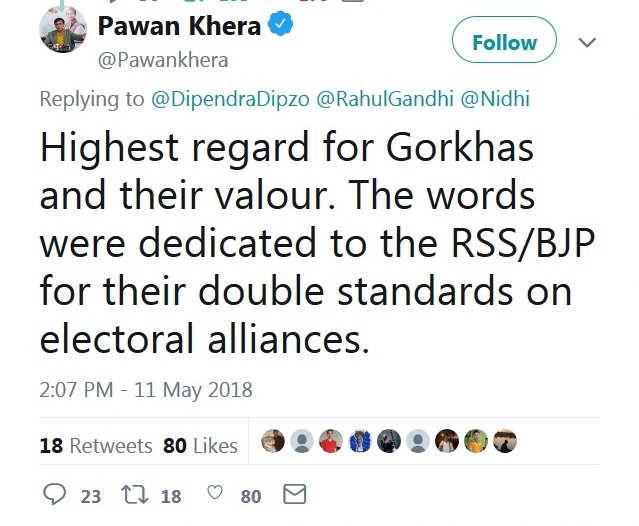 In another instance of humiliation meted out to the Gorkhas, Pawan Khera senior Congress spokesperson and former Political Secretary to Delhi CM Sheila Dikshit clubbed Gorkhas with Khalistan Separatists and went on to label the Gorkhas as “separatist and anti-nationals.”

The offensive comment was made by Congress spokesperson Pawan Khera in NDTV debate program Left Right and Center.

Reacting to the BJP accusation of Congress joining hands with Popular Front of India, which has been deemed to be a militant and extremist organization, Congress leader Khera started to count the alliances that BJP had made, and counting his fingers claimed, “Bodo, Naga, Gorkha, pro-Khalistan elements, IPFT in Tripura – six states in which you have joined hands with separatists, anti-Nationals, traitors, anti-India.”

This slur on the Gorkha community was immediately condemned on Twitter, by @BiswadeepTamang who wrote, ” @Pawankhera how irresponsible of you to equate the entire #Gorkha community with Khalistanis and Naga rebels. You are totally ill informed by Jyoti Basu and his brigades on what #Gorkhas in India stands for. Educate yourself, before you speak rubbish. @Nidhi”

He also uploaded the following screenshot to inform the ill-informed Congress spokesperson.

” @Pawankhera Read what Congress and the former PM Rajiv Gandhi had then said on Gorkhaland. October 15, 1986 India Today https://bit.ly/2wumvqc”

Another Gorkha twitteratti Dinesh Sharma who tweets under the handle @OyeKeta wrote,

“Dear @INCIndia, please clarify what your official @PawanKhera means by calling #Gorkhaland #Bodoland #NagaIssue anti-national conspiracy. Your politics of #appeasement and #MongoloidPrejudices has pushed democratic movements in the #NorthEast to the brink of extremism #Apologize”

Taking strong exception to the lies spewed on national TV, one of the most followed Gorkha twitterattis @DipendraDipzo wrote a series of tweets, among which he asked Pawan Khera to apologize,

“Hello half-informed idiot @Pawankhera APOLOGIZE ASAP. Since when Demanding statehood within the UNION of INDIA became Anti India?? Hello, @INCIndia @RahulGandhi make this moron @pawankhera to APOLOGIZE ASAP. You are a traitor, not us. Idiot.”

The outrage felt by all Gorkhas on twitter, is gradually turning  into a gradual movement to ensure that no one throws Gorkha name to muck again, as this tweet by @VaniraKhati states,

“In a moment of absolute brain freeze @Pawankhera labels Gorkhas as anti nationals. He cannot get away by tampering with our reputation thus. #CongressMustApologizeToGorkhas”

Following the intesne pressure put forth by Gorkha twitterattis, @Pawankhera issued an apology, in which he clarified, “Highest regard for Gorkhas and their valour. The words were dedicated to the RSS/BJP for their double standards on electoral alliances.” However, the Gorkhas are not at all amused at this half-hearted attempt at an apology. As made clear by @prity_gurung who wrote,

“Don’t cover up your words. We have in record what u said. You should be ashamed for what u said. Have the courage to apologize and shut the hell up”

Gorkha twitterattis want Pawan Khera to issue an unconditional apology for slurring the name of our community. As this tweet by @GorkhaCheli explained,

“U drew parallel with anti nationals. Named us along with Separatists. Called us Traitors. FYI, there is dedicated regiment of Gorkhas protecting our nation at the borders and thats why you are able to raise your voice in Studios with comfort.”

“On what ground this ill informed ignorant @Pawankhera labelled us separatists and antinationals? Is demanding a separate state under UNION OF INDIA antinational? We condemn his malicious statement maligning our repute and seek his Apology ASAP”

“These kind of lies are misleading, and makes ones blood boil. He doesn’t know what he’s saying. The right thing would be to apologise to the ever loyal Gorkha’s, who are sent, first in every war.”

The support for Gorkhas is coming from others as @MarkKumar3 writes,

“We support Gorkhas demand for their own state separate from West Bengal. This @Pawankhera won’t learn like this. Teach him some manners in Gorkha style”

Time for Pawan Khera to issue a proper apology.