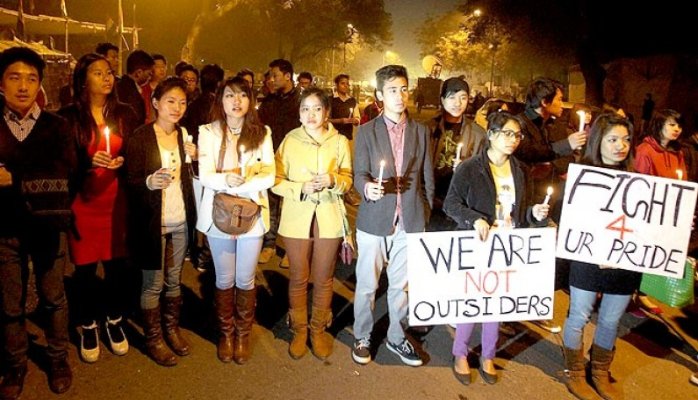 
“Aren’t you a Nepali? Go back to Nepal” has often been used to question the credibility of the Nepali-speaking Gorkha community living in India. The ‘Nepali’ card has always been used to discredit any demand for constitutional or political rights, deny social welfare benefits, or economic development for the community.

The most recent example of the ‘Born in Nepal’ jibe comes from none other than senior BJP leader, SS Ahluwalia, who ironically is the sitting MP from Darjeeling constituency, a Gorkha-majority region of West Bengal. Although Mr Ahluwalia promptly issued a clarification that the jibe was intended towards specific people and not to the entire Gorkha community.

However, the point remains why such a senior and respected parliamentarian can casually use the nationality card against Gorkhas just to score a few political points against his opponents. It reflects the mentality of the mainstream political parties and leaders towards the people of our community. It also exposes how rooted the bias against Gorkha community is within the political establishments and Indian bureaucracy.

In 2017, during the Gorkhaland agitation, Pawan Khera, spokesperson of Congress party called the Gorkha’s demand for statehood as a separatist movement on national television. Mr Khera also apologized for his comments, but the point here is not about the apology, but how could people in power and position allow such a biased mindset to exist and thrive.

In February 2019, there was a video being circulated in the social media where an MLA from Meghalaya was seen threatening local Gorkhas in Langpih to ‘go back to Nepal’ because of a border dispute between Assam and Meghalaya. It is surprising that politicians could go and threaten people to leave a place, instead of resolving a political dispute in the spirit of the constitution.

The West Bengal government has time and again used the nationality card to sabotage the Gorkha statehood demand and accused it as a secessionist agenda. By conveniently playing the nationality card, the government continues to deny the constitutional right for self-rule and demand for a state within India’s democratic framework.

Throughout the history of Independent India, the Gorkha community has been a victim and continue to suffer because of the political biases and untrusting leaders who conveniently play the ‘Nepali’ card to suppress the demand for constitutional protection of the Gorkhas. However, the fact remains that the demand for Gorkhaland state has always been a demand for constitutional protection of the Gorkha community within India.

Historically speaking, the Nepali-speaking community was integrated into India after the Treaty of Sugauli signed in 1816 between the British Indian government and Nepalese King. Territories were negotiated including Darjeeling, Sikkim to the east, Nainital to the south-west and the Kumaon Kingdom and the Garhwal Kingdom to the west. People living in these areas became part of the new political Indian territory because the borders shifted for them without having to migrate anywhere. Following the treaty, huge numbers of soldiers were recruited from both India and Nepal to serve in the British government.

During the Anglo-Burmese war (1824 – 1826) the Gorkha soldiers formed an integral part of the British forces fighting to push back the Burmese troops advancing from the Northeast. The Kingdom of Manipur was liberated from the Burmese king after seven years when the British and the Burmese signed the Treaty of Yandabo in 1826.

With the settlement of the British soldiers in the region after the war, more Gorkhas were brought into the region to work in construction projects, forest, mines, agriculture workers, and local security forces. Grazing fields and the land was allocated for workers and their families to settle. Today, you will find small pockets of Gorkha community in also every part of the Northeast region. Most of the families trace back their roots to the grandparents who had come to the region as a soldier, farmer, or as labor in construction and mining fields.

Thanks to media, movies, and popular culture, the word Gorkha is today a synonym for soldiers and bravery. The legends of Khukuri have become even more potent than a nuclear weapon. The Gorkha troops have been at the forefront of nation’s security, be it representing India’s contingencies during the World Wars, wars with Pakistan, China, or India’s peace-keeping missions and UN troops. Thousands of Gorkha people drafted into the INA forces, while others joined the civil movement against the British occupation under Mahatma Gandhi.

Sadly, however, after the Independence of India, Delhi’s political and personal biases have always clouded policymakers and bureaucracy. The biases are not new and have run deep well in the architects of modern India. The correspondence of Sardar Vallabh Patel to Prime Minister Nehru in 1951 with regards to Tibet and the Eastern mountain regions speaks volume about such prejudices. In 1979 Prime Minister Morarji publicly declared Nepali as a ‘foreign language’ to a request for inclusion of Nepali language in the Eighth Schedule of the constitution. In 1992,  the Nepali language was included in the constitution as a scheduled Indian language.

In the 1980s, thousands of Gorkha families were forcefully evicted and displaced during the ‘Bhumiputra’ movement that swept across the Northeast region. Since then, the Gorkha community has been at the receiving end of all ’nativity’ propaganda that began primarily against illegal immigration from Bangladesh. The mass exodus gave rise to fear that the Gorkha community will gradually be evicted from across the country without the protection of a state of their own within India. Subash Ghisingh, leader of Gorkha National Liberation Front (GNLF) led an armed uprising demand a separate state of Gorkhaland for the protection of Gorkha people and preserve their cultural identity in India. More than 1300 people lost their lives trying to prove their belongingness to India and demanding their constitutional right to self-rule.

From the ominous beginning of the new political wave in the Northeast region in the 1980s, the Gorkha community has gradually been excluded from active political participation, jobs, education support, or welfare benefits. You can ask any Gorkha living in the Northeast about how discriminated they feel in their respective states, how they are treated by their fellow citizens and leaders. The ‘you are from Nepal’ jibe is an everyday living reality for the people and become political fodder for opportunist leaders and parties.

Even after 50 years since the violence of  for Gorkhaland statehood demand, the fear and the issue of constitutional protection still remains unresolved. Although the Gorkha state movement withstood the test of time and remains uncorrupted by the various allegations, people leading the movement have often crumbled under the West Bengal’s propaganda and administrative pressures.

The Gorkhaland issue to this day remains as relevant as it was in 1907 when the Hillmen association for the first time submitted a memorandum seeking separate administration for Darjeeling hills. With politicians and people in power, time and again raising the question of nationality to push their personal agenda, the threat to Cultural and Political Identity of the Gorkhas in India is still a big reality. Excluded from active political participation in most states, the Gorkha community continues to wait for justice to be delivered and inclusion into the political identity of the nation.