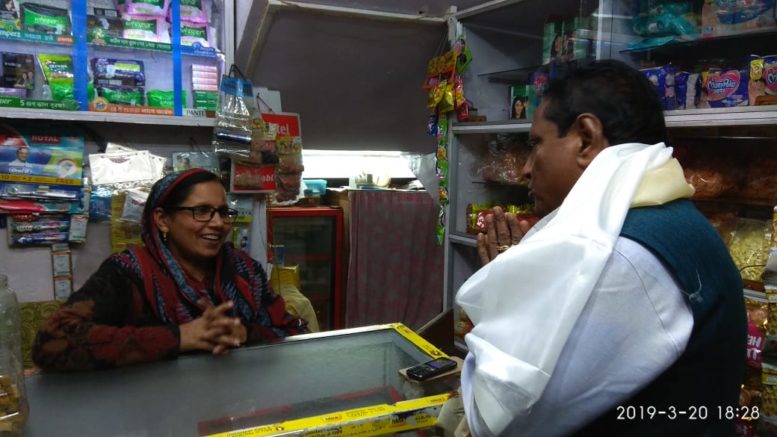 
Darjeeling Congress candidate Shri Shankar Malakar, went for a door-step campaign in Kurseong yesterday. In the town, many youths came forward and asked some pertinent questions.

After talking to the youths, Mr Abhiraj Subba the General Secretary of Darjeeling District Congress Committee and In-charge of Kurseong Subdivision said, “it gave us immense pleasure to see that the our Youths have become conscious, and they are asking about the past works and future agendas of the party. Had they done this before, then BJP wouldn’t have got this opportunity to tell us to go to Nepal and Our Brothers wouldn’t have died.”

Mr. Malakar clarified, “During the 105 Days of agitation the Indian National Congress has worked and spoken for the Gorkhas both in the Centre and in the ground level. Miss Sushmita Dev (Member Of Parliament-Congress), Shri Jyotiraditya Scindia (Member of Parliament-Congress), Shri Raja Mohan Reddy (Member of Parliament -Congress ) had spoken in the Parliament against the atrocities done to the Gorkhas by the TMC government, when our own MP SS Ahluwalia was mum about it. “

Mr. Subba added, “Locally our Congress cadre have done a lot to help the Saheed and the wounded agitators in Siliguri. Delivering Saheed’s dead body for post-mortem from Siliguri to Kurseong when a single ambulance wasn’t ready to go to Kurseong fearing the atrocities of the police. GJM Party Members themselves denied to receive the dead body due to the fear of the police fear of the police. Lakhpa Tamang from Relling Gumba Dara Bijanbari was assisted by our cadres in Medical College and Later shifted to Anandaloke Hospital. When 13 people were summoned by the police and had nobody to fight their cases Our brave Congress Lady Advocate fought for them and got their bail. We submitted a memorandum to the Matigara BDO for wrongfully imposing CRPC 144 at Kadamtala area. Due to the pressure given by the Congress Party the police lifted CRPC 144 from Kadamtala areas and the police atrocities were stopped. Youths got a big relief from the police raid and could stay at their home. Congress has always supported the democratic movement of Hills.”


Labelling the current TMC regime as being “Hitlersque,” the Congress representative added, “Mamata Banerjee’s Hitler regime grew only because Congress weakened in the Hills. Now we will bounce back and fight against these two communal forces and we will work to restore democracy in the Hills.”

Be the first to comment on "“Where was Congress During the 105 days of strike?” Kurseong Youths ask Darjeeling Congress Candidate Shankar Malakar"