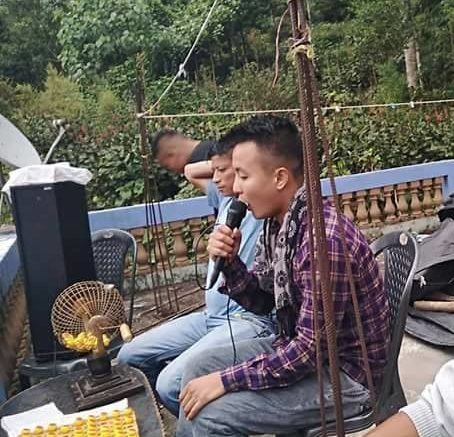 
Darjeeling Everyday is a delicious feeling. Here in Darjeeling, the festive seasons are almost to end and we are now at the best part of the entire season – the Tihar days. Everything about this time of the year is beautiful – bright sunny days, smiling mountains, milky white clouds (if any), delicious food, selrotis, flowers, vailo, dewsi, vai tika, dakshina, drinks and what not? If you get greeted by pleasant weather mixed with the aroma of saipatris added to a clear view of the mountains, you are here.

Yes. If you haven’t been fond of visiting melas or playing dice or housie, you haven’t tasted dasai or tihar perfectly in Darjeeling.

Dice, also known as animore (anymore) or jhandi makut, is the easiest of all and the most famous game of the season. Even before you notice the “dasai kira” herald the arrival of dasai, you see “Paal and Gaddi” come out. The tagline of Dice has always been very basic and deep – “Aayo sauko, gayo bauko” and that you see on every dice chart (paal) written.

Now talking about the dice players, you find different leagues of them.

First are those who stand and observe the game carefully and understand how the suits (daw) are rotating, and then start bidding. They calculate all the probabilities carefully and also keep in mind the way the bookie is shuffling the dices. And when in doubt, always say “lu kholdey bhai ek palta”.

The second ones are the “taato pindaalu” types. They choose a suit and hold on to it, doubling their bid everytime they lose. Once they win, they choose another suit and keep doing the same.

Again, we have loyal types. They have certain connection or love with one of the suits and they stick on to it forever. No matter what they bid, there is always a jhandi in between if they love jhandi, or a bhotey if they love bhotey and likewise.

The other ones are the confusing types. Their main motive besides winning is to keep the bookie confused. They have strange pattern of bids, what they better call “koltey daw”. They biddings are like “7 ruppey jhandi, 3 ruppey makut”, “37 ruppey bhotey, 13 ruppey eita”, “baira 3 ruppey, vitra puraii”.

And again there are the most excited ones. They sit just by the chart and keep bidding 2 rupees everytime. Their eyes start glowing ones the bookie starts revealing the results and almost jump on the chart once the lid is completely lifted.

There are again the ones who are the most dreaded nightmares for the bookie, the “jandaa” types. The hold many “bookie uthawney” stories under their belt. They don’t speak much, besides time to time “kholena ta haw yeslay ta”. They roll their eyes carefully with the movement of the dice shuffles and place their bids in the most calculated way. They steer their way to continuous flowing money while people are like “Yelai ta heavy fapcha hai” and “nikai maaryo aaju yeslay”.

Any which ways, my favourite are the ones who stand with their hands folded and just enjoy passing comments. “aabo chidi awcha her la”, “yo gotti ghotnu parcha”, “yelay paana nikai rokyo, aabo confirm kholcha”, “kasto makut ma haaleko thuttt, bhotey awcha herna aabo” and so on.

However, dice is for those who prefer instant entertainment or easy gamble. For those who are more into a sustained form of time pass and thrill, “housie” is just the right thing for them. So if in and around, you see people of all ages carrying an old notebook and a pen, and walking towards a place where perhaps you hear loudspeakers playing, thats the place to head. If you don’t have a pen as for such and come across a place with housie going on, you can still find a matchstick to poke the called numbers with, however it doesn’t work as efficiently as a pen.

Each game guarantees you fun, excitement and thrill for at least 20 minutes or more. Its tagline, unlike dice, is a bit less orthodox. It goes by the phrase “Bhagya Pariksha”, and rightly so. If your day is good, you can hit a “yes” well enough to treat your entire squad a diwali grand.

Unlike dice, the main point of focus here aren’t the participants, but the bookie or the conductor. Just like dewsi, the crowd and income depends on how well the bookie conducts and it’s basically a big test for his “bhattawney” skills.

I once had come across such a terrific person, who had a funny rhyme for every number. Once he would start saying “lu hilaakey aaya”, he would never stop. His passion and flow would only be broken by occasional screams of “yes” in between. The rhymes are legendary and everyone who has ever played housie is familiar to them. In fact, the bookie need not even say the number and the people realise the call by those phrases and rhymes. For eg. If the bookie says “Baini ko gala ma kothi”, the following call would be “four and zero forty, chaar ra sunya chaalis”. Similarly, “hatti ko pet” would correspond to “single number eight, eklo sankhya aatth”. In fact, all the numbers somewhere or the other had a phrase corresponding to them. “Dui Bhurey Thela thel” would be 88, just going by the shape of the digits and thus 7 would be called a hockey stick.

But the person I talked about had his own way. He would twist the phrases and the rhymes in different ways to reach a different call than the expected one. Like, he would start his call with “baini ko gala ma kothi” … the people knowing him would wait for his call to get complete, while the new ones would already mark 40; in fact they would even shout “yes” if it was the final number they were waiting for. But then he would continue “Baini ko gala ma kothi haina dantifor (pimple), four and four forty four, char ra char chawalis”. He would again say “hatti ko pet, pet vitra andra, andra vitra gu, single number 2, eklo sankhya dui”. He was a legend in whatever he did, and always invented fresh new ways and phrases. Many would have almost have their sheets cancelled for they called “bagi vayo”, if shouted “yes” wrongly.

On the other side, it was a different game entirely for the players. The nail biting moments when you are waiting for the last call, the adrenaline rush when you are waiting for a number in the line of 20 and the bookie calls “lu aayo Dui ko line ma”, and the call misses your number by a slight difference. The disappointment when you are waiting for your last number and someone else shouts “yes”. The frustration on your face when one of your sheet house gets almost full rapidly and then the calls start falling on the empty houses. The fun when you are playing in your own village, and you shout “yessss maams, anta thikai chaw timi” just to annoy or get the bookie and the people confused; and the bookie is like “Kosley yes vanyo?” It’s a worth it experience altogether.

Now talking about the place where you have both dice and housie together. Yes, the mela of course. The Dasai season brings with it small and big melas in and around, and they are the last resort for your dasai and tihar evenings. Whether you are bored at home or drunk outside having nowhere to go or whether you are with your friends or family, you can anyway spend some good time in the melas around. The quite well known melas in Darjeeling are the Lebong Mela, High School Mela, Koiri Mela, Mungpoo Mela, and obviously the Kalimpong Mela.

So the question is, what can you expect in these meals? Dice, Housie, cards, overpriced food, various rides, ice creams, some big tent of dance or magic, accessories, Mitha Paan with cherry and silver foil, and obviously a committee of local guys if you are up to some trouble or mischief. Of all the rides the “roti ping”, “columbus” and “break dance” are always present in every mela. I, however, avoid the break dance since the time my drunk friend threw up when on a ride. Thankfully, I was in seated in another unit, still I too felt like throwing up. “Roti ping” or merry go round has however been an all-time favourite.

You know you are in a mela in Darjeeling if you are having an ice cream while shivering of cold during chilling evenings, or you win a hit beer in the game of cards. You don’t actually plan visits to any mela. You are in the town with your friends when you realise there is a mela around somewhere and you head straight to the place.

This is how Darjeeling is during the festive season, and it moves forwards magnificently as a culture. So if after a night of dewsi or vailo, that gets your throat dry, and vai tika, if you manage to keep some cash remaining, you know what you can do now.

On the 5th Day of Durga Puja – We Pray to Skandamata

Be the first to comment on "Darjeeling Everyday: From Jhandi-Makut to Housie – Things we Lived for"