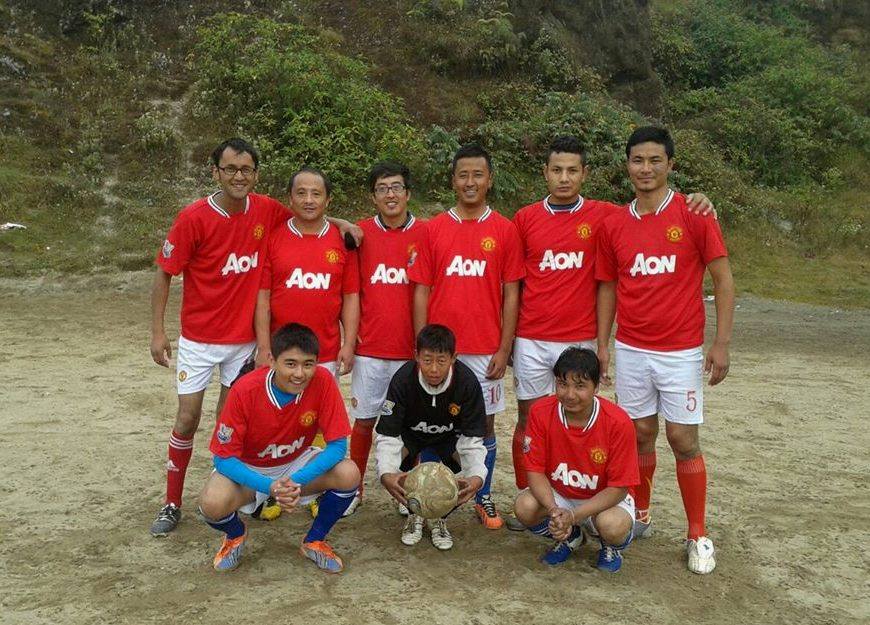 If you have ever been curious as to why they call football ‘a beautiful game’ you should come to Jorebungla during the football season. Now don’t ask me when that is? Because no one knows for certain, but we love football and play it with gusto, ask anyone who is from Jorebungla, or even those who know of Jorebungla, they will all agree to one thing, there is no better example of the ‘beautiful game’ than inter-Jorebungla tournaments.

Basically football has been very popular in Darjeeling hills from time immemorial, and of the many clubs that are renowned all over Darjeeling, the Ghoom-Jorebunglow Sporting Club (GJSC or more popularly known as GJ) stands out as one of the most loved clubs. Each match of GJ is watched by thousands of fans from Jorebungla and Ghoom region, who travel in style – hundreds of trucks, land rovers, zongas, maruti vans and buses.

If we were in Argentina, I am sure GJ fans would be like the Boca Junior fans, in England like the Liverpool fans, in Germany like the Dortmund fans, in Spain like the Barcelona fans, in old India like the Mohun Bagan fans, and in new India like the North-East United fans.

Tales are told to the young ones in Jorebungla about the football glory days of GJ, and how it was actually the fans who helped win this tournament or that, and not really the players. That when once the team did not win the final game, how a GJ fan from Jorebungla actually stole the winner’s cup and brought it home, his only comment after revealing the cup in Jorebungla – “La tero cup” and the whole football mad fans are supposed to have cried out in unison –

Legends of Darjeeling football like Dil Prasad Rai (ex-Darjeeling Police and Bhutan National Team Coach), Suren Pakhrin – JOJO (ex-Aryan Football Club), Kundan Thapa, Dhaneshwar Prasad, Uttam Gurung all represented GJ at various stages in their career, and it was these legend whose legacies the people of Ghoom-Jorebungla were expected to carry forward.

Back in 1990s DGHC had started this Mahakal Cup which was famed for giving away Rs 1 Lakh as prize, back then GJ had split into two GJ and Shiva Shakti, and if I remember correctly Shiva Shakti won the tournament all three times before they stopped hosting it.

One of the most memorable games from one edition of the tournament was played between Shiva Shakti and Darjeeling Police, it was the semi-final game played at Lebong Ground, almost everyone above the age of 12 from Ghoom-Jorebungla had I think gone to see the match. It was a festive affair, till when Gopal referee erroneously awarded a goal to the Police team, which the GJ players objected to, as the linesman had lifted the offside flag. Following the protest by GJ players, Gopal referee decided to not award the goal and awarded a free kick to GJ instead.

This pissed off the police players, who were already down by two goals I think, and they started to misbehave with the referee, to the extent, one of them in fact landed a punch on the referee. It went downhill after that, apparently Mr. Gopal’s wife or daughter was in the stands, saw it all happen and could not stop herself. She entered the ground, got Gopal referee to take off his jersey and she started to tear it up right there on the ground, amidst loud cheer from all the GJ fans.

The police team could not take it anymore and there was a scuffle amongst players, to which GJ fans naturally reacted and started to shout and yell against the police team, at this the police who were there on duty to maintain peace lost their cool and ended up hitting one of the GJ fans – it was pandemonium after that.

I won’t go into details of what happened, but let me put it this way, the police team, and the police on duty themselves had to be escorted out safely by senior GJ functionaries – go figure. Later on our way back home from Lebong, each of the vehicle full of GJ supporters stopped in front of the home guard office in Darjeeling town and chanted

No policemen or women dared come outside to stop us.

Such is the passion when it comes to football in Jorebungla and also by extension Ghoom. But this article is not about GJ, it’s about the best and most honest football tournaments in the world “Inter-Jorebungla.”

When I was growing up, there were a few teams that were notoriously legendary even within Jorebungla. Milan Samity – one of the main football teams of Jorebungla, which was a feeder for GJ, other one was Rising Sun from Diary which had the legendary goal keeper Suren Subba (popularly known as langade Suren in Jorebungla), Tiger 7 which consisted of players who worked in tourism office up there in Tiger Hill, and Young Blood – which consisted of upstarts and younger crops of players who were sort of a rebel team from Garidhura-Bichgaon, and even their goal keeper Late. Palu Wangdi was legendary.

Within Jorebungla the legend of Palu and Suren’s enmity is so profound that I could write a whole article dedicated to them. But both were goal keepers from rival teams, and notoriously anti-each-other.

One of the game which I still remember was being played between Rising Sun whose goalkeeper was Suren and Young Blood whose goalkeeper was Palu, something had happened and the game was on hold. The two teams were sitting on the ground in their respective half, and the crowd was all, you know, being crowd – “dhilo bhaa… paisa farka” kinds…

So Palu starts walking towards the other half, remember he is a goal keeper hai, gets past the halfway mark and all of a sudden starts to yell – “Surennnnnnnnnn… Tero A**… K bhanis toiley malai…” and ran towards Suren… and before Suren could get up, stuck him with a Vogals boot (do you remember those?), Suren was flat on the ground… and Palu left the field. The game was abandoned after that.

I mean where else do you get to see such action in the middle of a football tournament?

When I started to play soccer, basically there were three main tournaments that used to be hosted, Tik Hang Memorial organized by the Four Square club – which consisted of two Dimple and two Pema and hence the name Four Square Club – in the memory of late Tik Hang Subba who had unfortunately drowned while swimming – this was inter-Samesty tournament. Another was Sushil Memorial organized by 7 Brothers Club in the memory of Late. Sushil Subba who had died due to a disease when he was in the prime of his life, and the Dil Prasad Rai Memorial which was organized by the Regent’s Club.

What makes Inter-Jorebungla football tournaments amazingly beautiful is not the quality of the play or the player, but the festivity which surrounds the games. People from all walks of life, in all physical shape join the tournament, with majority joining to play for fun, instead of wanting to win the tournament.

If you don’t believe me check out some of the team names, they are a dead give-away to how much fun Inter-Jorebungla actually is – here are some samples:

There was also a team called Lashkar-e-Tayiba once

There is no doubt in my mind that if there is honest football played anywhere in the world, it has to be in Jorebungla. No one is playing to win, but everyone is playing for fun.

The players are crazy you might think, the fans are even crazier, cheers of:

and if there was a good player on the opposite side, chants of

could be heard all around the ground…

If the goalkeeper refused to dive to save a ball, the whole ground would shout out ‘Lar na oie lar… Buru mo luga dhui-dinchu‘

Every once in a while, fights would break out between the supporters, instead of the players… sometime even the ladies would get involved.

But don’t let the names of various teams or craziness of the supporters fool you, as they do not suggest the quality of those playing… my own peers were amazing players – everyone in Jorebungla even to this day talk of Debrey Pritam, his left foot was so potent that if he got the ball to go to his left foot, chances that he would score were very high, his right one was useless though. Then there was Scissor Karma – his scissor shot was legendary for having gone with such force that it tore the net. Then there was Diving Ganesh – whose prowess in front of the net was unmatched – one of the best goal keepers in our days.

But along with the good players, were players like me – Limit 15 minutes

The most I could seriously play was for 15 minutes, and then I had to look for someone to substitute me. Majority of the players were like me.

There was this daju whose name I won’t take, let’s call him Mr S… he was legendary in that he was a Captian of his team in all the tournaments – year in and year out Mr. S would show up with his immaculately dressed team. Funny thing was that he would be on the ground till the formality of the handshakes were done with, as soon as the toss was over and the pictures clicked, he would be out in the sideline.. cheering his team… imagine a Captain sitting out as substitute even before the game had begun.

Yes! He was the one paying the join fees, so undoubtedly he would be the Captain, but as far as playing was concerned, that was not his job.

Funny things like that you know, how you miss when you are grown up.

The team from our village Garidhura, were hopeless in Football, we were good in Cricket but in football we were hopeless. When we played, the score line would read 2-7, with us scoring 2 or 1-8 with us scoring 1. But it never mattered. After playing the game, when we got home, everyone in the village would ask what was the score and if we said say 1-9 they would be very supportive and say… “1 ta diyecha nee… syaabas”… and if we said “2-6” then they would be like… “Amamama dui halyeko? Ramro khelyecha ta hai es palee ta.”

Where else can you find such beauty, simplicity and supportiveness?

Of late our team has improved though, younger players are starting to perform better, and there is a hope that may be, just may be Garidhura may win a football tournament someday soon.

Since I was away from home astee, my younger brother sent me a message, it simply read “Daa 4-5” I couldn’t believe my ears Garidhura scoring 4 in a tournament? Is unheard of… Man the kids have improved these days… so I asked them against whom? and he goes, “Water Supply.”

Now that is the Unmatched Charm and Beauty of ‘Inter-Jorebungla’