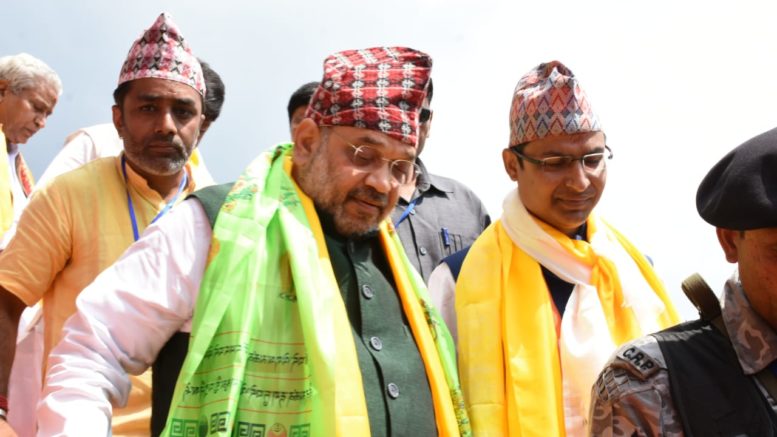 In a democracy, the citizens have a decisive role in electing their representatives, so as to pursue their grievances and democratic aspirations at the appropriate level. In our regional level, our long pending grievances and democratic aspirations have been left to be addressed appropriately by the concerned government and administration, for perhaps the longest period of time.  Owing to which, the citizens after having been facing and experiencing the plight on a day to day basis, for decades and  generations. Altogether, we have been extremely concerned and worried, given the present political circumstances, for the overall well being of the region and our society.

Elections are also an opportunity for the citizens, to express their support/resentment towards the ruling party, or in support of a party that they most recognize themselves with.

The situation on ground today reflects gradual advent of frustration and resentment in the minds of the common citizens, who feel helpless. It is for everyone to see and understand the complacency, lack of concern, seriousness and commitment of the ruling dispensation in the state and its political allies, towards addressing realistic issues of our society and region.

Towards issues of employment, education, development and infrastructure, the plight of the shramicks of tea and cinchona gardens, land rights of citizens in tea garden and DI fund areas, rural/panchayat areas, forest villagers and dwellers, farmers, common citizens of the region, the situation is apparent for everyone to see.

The solution provided by the  state government till date has been unilateral,  in piecemeal within a  fragmented framework, as in instances and decisions that transpired in 1988 , 2011, 2017 and further fortified by the presence of so called development boards accorded to the citizens of hill areas, all of which has spectacularly failed to redress the grievances of the ordinary citizens.

Hence, it is imminent that a political mood swing in the region and the state is about to happen. With shift in the mind-set and perception of electorate, due to hasty and unilateral decisions of the administration, governance in the region and political parties of our region towards fulfillment of people’s aspirations, things on the ground are poised to change dramatically.  There is an apparent anti-incumbency wave, lack of faith and trust towards the ruling state dispensation and its regional political allies.

Our hilly region and adjoining areas of North Bengal too is not immune to the force that influences millions of fellow citizens in and across the country. With the vision of an emerging nation, a decisive Prime Minister and  government at the center, showing concern and commitment towards  fulfillment and  making good on its promises to citizens.

Today the people know and consciously realize, that the need of the hour is a holistic and a permanent solution that would influence lives across our region and society, and that Sri Raju Bista, Hon’ble MP, and his party is the one and only foundation and resource so as to consistently pursue and address our issues of our aspiration, the principal solution of which lies only with the Parliament and Union Home Ministry.

The vocal Parliamentarian has shown commitment and has ample potential to lobby and influence the decisive tables of Delhi, unlike our previous Parliamentarians.  All the more, a conducive political atmosphere could be created if his party BJP forms a majority in the upcoming Assembly elections, hence it is significant and crucial to support BJP.

Let is also not underestimate the fact that they have acknowledged our grievances in their Sankalpatra in assembly and parliamentary format, dialogue process with the regional political allies in the course of its fulfillment has started and BJP leaders have time and again reiterated their commitments  for the region and its people.

It is for those stakeholders to see through a permanent political solution, as promised by the BJP, with proper strategy and political diplomacy. For this, it is also expedient to retain the political space and alliance by  the regional parties, so that our issues are seen through politically in the coming days, possibly before the next parliamentary elections, until which BJP stands at the helm of affairs at the union.

Therefore, the bottom line for a prudent voter should be to analyze the present situation, anticipate the upcoming political situations and silently vow and dream to see transformation and growth of the nation, to safeguard our region and community.

TRAGIC: 13 COVID Patients Killed in Fire in a Pvt