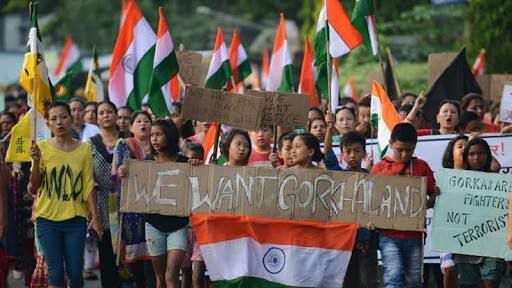 To realise our dream we need the revival of the movement. We have failed once, twice, thrice. We might fail again, but we shouldn’t stop making another attempt to realize our dream. Of course, we have made mistakes, but we can always sum up and learn from it. We’ve seen blunders of leaders, suppression, cheat, thug, bhyagura khedai and even chil tipai. Most of us are tired now. Tired of betrayal, tired of suppression, tired of julus, tired of memorandum submission, tired of bandhs & strikes, tired of everything. But still, we carry our dream in our hearts, and we are willing to give it one more push.

What do we need?
1) A strong political force – since, any statehood demand is a political solution and Gorkhaland/ 89Gorkhasthan/ Gorkha Pradesh is no different. It’s finally realised in the Parliament. The constitution will be thoroughly referred to and argued thus.

2) A unified mass movement and mass involvement. We cannot simply seek the movement to become a mass revolution. Because it is virtually unattainable in today’s date. Strong blend of mass and strong leaders is a must.

We are aware of what happened in ’86. Here is a short telling for those who aren’t.
’86, perhaps, is the best of all opportunities we’ve lost. There was mass involvement across the length and breadth of Gorkhaland. The Political force was very strong. What we lacked then was educated mass, the literate mass. Unlike today’s era, where people are aware of civics and political science, the scenario then was different. People believed in what the leaders said. I am afraid not every leader involved in the movement then had knowledge of civics and political science. They were easy to influence. Someone on the top directed: reduce him by 6 inches, they did. They didn’t bother to ask, why? Because “Party bhanda jaati Thulo, jaati bhanda maato”, the infamous emotional statement overruled the conscience of the thuttay leaders.

It’s not that game of influence happened on just one side. It happened on both the sides. We have, perhaps, heard of “mukhbhari maato kochareko” story.
“Talai maato chaiyo, laa kha maato.” Dreadful, no ?

What happened next? The situation turned violent all across. Many taukos were floating in Teesta – Rangeet while the bodies were found in sacks, i.e. jhola.
Again, dreadful no ??

Alas, “A Gorkha butchered another Gorkha”.
“Bir Gorkha” was redefined while cunning fox was enjoying the action from the top. They wanted that. Divide, divide, divide and “We rule”. People fell tired. Tired of running, escaping everything. Meanwhile, the boss had a compromise with all the cunning foxes. Junta were tired too. The boss compromised, tired junta compromised. Thus that blend of Leaders and Mass was nullified.

What was my contribution ?? Did I sacrifice any? I was barely 5 yrs. I vaguely remember my elder brother climbing on “kamaanle banaideko gharko dhuri” to fix that Najhukne Hariyo Jhanda. The next time again he was climbing on the same dhuri to pull off that “nahukne Hariyo Jhanda” because someone told that CPIM cadres were patrolling. We were simply saving our “arses” (Sorry). May be that was my contribution.

I ran across uttis ghari holding my mother’s hand to take shelter in some peaceful place and also broke “dui rupay ko goggles” in the run. May be that was my sacrifice.
I vaguely remember.

This dhokha is constitutional though. I am happy (happy????) that we bunch of Gorkhays forced amendment in the constitution for the first time, the second time during Bhasaha Andolan. With the guise thus the movement ended. The volcano of Gorkhaland issue went dormant for another 22 years or so. It was so dormant that people started believing in dhungas and mudaas. Most of the children born in that 22 yrs time even didn’t have the foggiest idea about statehood and its relevance.

Now, politics is all about opportunism, replacement and dethroning, believe me. While the Hario Jhanda party was continuously pressing for implementation of VIth Schedule in DGHC administered area, some intellectuals – including Late Madan Tamang, felt that the same wasn’t fruitful for the Gorkha community as a whole. The situation was is bit different because now we were two and a half generation Gorkhas. Knowledge of civics and political science had flourished. The pros and cons of VIth Schedule were easily understandable. It wasn’t certainly going in favour of majority section of Gorkhas. The intellectuals argued upon VIth Schedule and the mass believed them. In the meantime, the sinister ploy was cooking. Nobody knew.

I didn’t for sure!

The table turned overnight. Senapati revolted.
What was the issue of opportunism? There were many, and VIth Schedule is one of them. But like majority sections, I don’t hesitate to credit him for that. Consequently, upon the revolt, VIthe Schedule was forced into a dormant state. He was quite fair in that, I must say because to my understanding VIth Schedule is prejudice.

Incidents to quote following 2007:
1) One fine morning of 8th, October, 2007 the front page of every local news paper covered the news regarding floating of new Political Party. The aangan of dilapidated old Super Market in D – Town was overflowing. A human sea could be seen. So far, a Councillor had launched a new Political Party. Yes, Gojay was launched. People were excited, enthusiasm level different, many Gorkhays seemed euphoric. The picture in the front page showcased retired civil servants, renowned advocates, Councillors and ex-councillors, freedom writers, literary figures and students leaders. Maybe there were doctors and engineers. That was the bench of Executive Body of newly floated Gojay. You name a renowned figure and he/she was in the bench. It looked all impressive. Almost everyone inclined to Hariyo Jhanda, Raato Jhanda had defected. The body looked rock solid. Gojay had flourished. Hariyo Jhanda saw the replacement with tricolour. I was in awe for many days. Maybe I was in oblivion till then. How could a new Political Party in dictated Darjeeling flourish overnight.

2) Incidentally, the Indian Idol had happened. Already developed sense of Gorkhaness got a different boost. We wanted our Hero to win. Every Gorkha worldwide went crazy. Why not? We had a reason. Someone was there to promote our diluted identity. Someone was there to separate it from the solution. We prayed , we thanked. Wait did I miss opportunism again ? Yes , this development was smartly taken up by Gojays. No one would have dared to open free booth during that time everywhere around the town. The new Boss did. Each and every one of us contributed. I did contribute some votes for the hero, if not many. We could see the unity when it came for “Gorkha”. Almost everyone had realised our “Identity Crisis” by then. We had a win because the finale was ours. Our Hero was the winner. He was, perhaps, blessed. All thanks to us and, yes, the commitment and dedication of the Gorkha Pride. Who else did win? Gojay again. It came all strong following grand finale and I don’t know how.

3) Next we saw was power thrown over. The Old Boss was, perhaps, in oblivion like many of us. Red Bunglow where all the developments right from Rohini Road to recognition of Dhungas and Mudaas got its consent was gheraoed.

The Old Boss was forced to flee. Now from demand of dropping VI Schedule, the demand for GORKHALAND popped up. Actually, things boomed up …B.O.O.M. The issue was hot vis-a-vis 2009 General Elections.
Every corner and every state echoed. “We want Gorkhaland! Gorkhaland, Gorkhaland”. “Teesta Rangeet k bhancha ? Gorkhaland, Gorkhaland”
First time in the history of Gorkhaland demand something out of the box happened. The virtual party in power teamed up with Safffroners. We gave an MP to the Safffroners and it was also a record in itself because he was the second to represent BJP from Waste Bengal. Sadly, Safffroners didn’t acquire the required mandate at the centre.

Our dream was again crushed.

4) This wasn’t certainly the end. There was a way to go. The plan worked, but didn’t work too. Gorkhaland issue was still echoing. Demand and protests were happening everywhere. Gojay was leaving no stone unturned to bring it to streets. Rallies were being organised. Shahka – prashakha were being sensitized. It was indeed the strongest political force in Dorjayling. Meanwhile, Mr M, also then the influential political figure had something else in his mind. I am not quite sure whether Mr M had openly taken Gorkhaland demand to different level or was just sitting in opposition to oppose any development of local parties in power. What I know is he was fed with history and civics foh soh , mass leadership & organizational structure of his party Gorkha League, however, in question.
With 2011 Assembly Elections round the corner Gorkhaland issue was certainly to be raised again. However, who knew the plot would take a different turn. But then it’s a plot. It can turn anywhere, anytime.
Happened assassination.
Whose?? It was Mr M.
Where? Near Club Stand.
When? Broad daylight of 21st May 2010.
How? Hacked to death.
Why? Speculative.
Who did? I wish I knew.
A mystery, so far. It’s like no one killed Mr M, Khukuri did.
Neither CID nor CBI has the foggiest clue, so far.

5) What happened next? The leaders of opposition leaders were booked. Caught and jailed and finally bailed. In an obvious scenario, Gojay was blamed by many because Mr M had many things to reveal against them, as assumed. (I am pretty unaware as I said, speculative). But what was equally unfaithful was the development that followed. Gojay was forced into an agreement called GTA agreement. Leaders said, state jastai ho but not a state, but now the third generation educated Gorkhas were hard to bring into confidence.
The entire second spell of Gorkhaland has crushed again. Not that people didn’t sacrifice then. Not that they were not involved. They were equally involved as in ’86. There were sacrifices made. Protestors were shot and lathi-charged. There happened bhyagura khedai and cheel tipai. The movement was somewhat forced into compromise. We lost leaders, we lost our brothers and sisters. But what we gained was again nothing in the end.
What lesson we should have taken in 2017, from the two spells of Gorkhaland agitation was to have unified movement of mass and leaders. But sadly nothing as such happened. People boasted all across social networks that it was a mass movement but when the leaders were forced into a settlement, mass backed off. There were none on the streets.
Well, who would dare to!! This time again we failed because our conscience failed. We failed to come under the one roof and fight the last fight.
Now the question is, next time if the movement is revived, will I join ??
My answer certainly won’t be no.
Yes, I will.
I should.

Hopefully, we’ll define our Identity and a state of our own within independent India one day !!!!