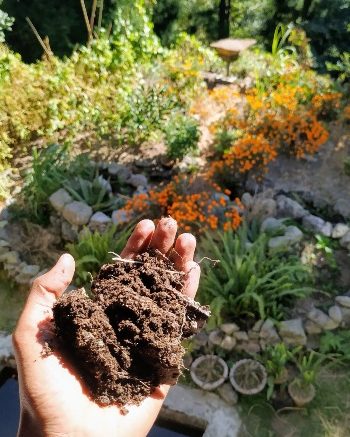 
What do you feel? Was there a flood of emotions that take you back to your childhood where you can hear your grandmother chiding you and your siblings for rolling in the mud?

Or was there a tug on your heart? Where the word when spoken aloud, took you back to those lost years where you had given your youth to fight for a cause that you truly believed. You were told that it was all…. “Hamro Maato ko lagi..”

Most of us may no longer be growing our own food but just like the trees in the forest all of us are also strongly rooted in the soil in myriad ways.

Today on World Soil Day, as I hold a handful of our forest soil and let it slowly pass through my fingers, let me share the learnings of my permaculture journey so far and unravel some of the fascinating mysteries of the soil for you.

To start with, let me talk about this soil that I hold in my hand. It’s rich, dark and loamy. There are some creatures that are visible to me but most are invisible to my naked eye. Would you believe me when I tell you that this lump of forest soil that I hold in my hand has more living beings than the total human population on this planet? Yes, Soil is a living being. It is teeming with more life than any other element of nature.

Our relationship with the soil in our surroundings is linked to our well being and state of our mind too. Walk into a barren land with brittle soil and you will reach a house that is inhabited by folks that are bitter about everything in life. Walk into a land that is bearing fruits grown out of chemical fertilisers and you will reach a corporate office with suited and booted folks who define their needs by their greed. Walk into a forest where the indigenous tribes have been living sustainably for centuries and you will come across folks with the widest of smile and loudest of laughter. Folks who live in rich culture and have a lot of free time for music, dance and arts.

The health of the soil is directly proportional to our spiritual health.

Humans with their unique ingenuity have shared the closest bond with soil than other species on this planet. How have we drifted away from from being prime custodians of the Earth to now being its primary molester? Perhaps, what can we expect in a world where our school systems do not have a subject on ‘How to grow your own food’ and we mostly teach children to look at soil as dirt and filth and not as a thriving, living entity that sustains life on this planet.

The past three years of practising permaculture have been an eye-opener for me and my fellow custodians of the Tieedi forest. Comparatively, it been a short journey but here are a few things that we have discovered so far:

Scientists predict that if the current rate of degradation continues we have just 60 years of farming left! So, what can we do as individuals to restore the balance and undo some of the damage?

Here are some of our learnings on how we can evolve into better custodians of the soil:

Our experience of growing our own food has busted a few myths for us that surrounds the natural farming movement. No, your harvest will not be reduced. Your crops will not be any smaller in size than the food that is produced with chemicals. As a matter of fact, your crops will be a lot more dense with nutrients when you grow it naturally.

But is this soil activism restricted only to farmers or is it something that can be practised as an individual who has a different occupation and is living away from the forest or open farmlands?

Yes, you can harbour love and respect for the soil wherever you are by implementing the following changes in your lives:

Lastly, on this World Soil Day, with one hand over heart, join us in taking this pledge…

“HamroMaato or our soil that has fed us for over a million years is now asking us to help her. She needs to be nurtured and taken care of until she feels better and is able to regenerate herself. I promise to take care of her. It’s the least I can do to someone who in the true sense is the Mother for all of us.”

1 Comment on "“Maato!” Close Your Eyes and Say it Aloud"