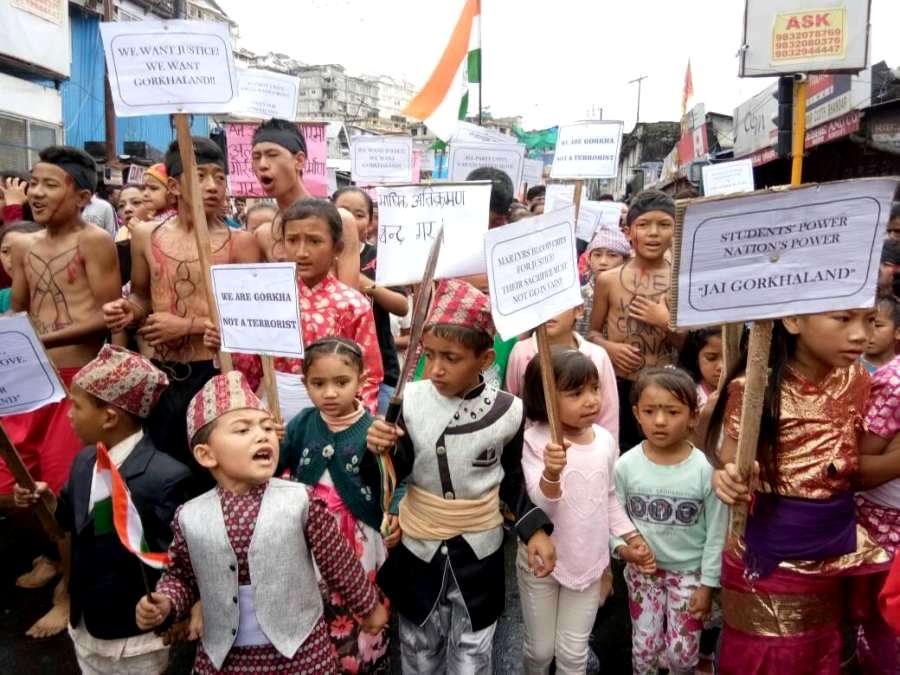 ‘Ignorance is a bliss’ and the humiliating wash-out of our agitation for Gorkhaland, yet again, is a blot in our history which cannot be brushed aside, feigning ‘ignorance’ as our scapegoat. The same ignorance among hill TMC leaders and their supporters seems to have reached an all-time low level in as much as party’s low-profile ground works following the disreputable fall of agitation for three months. We read newspaper accounts of how baffled, disillusioned and ill-defined the ranks and file of hill TMC have been rendered vis-a-vis a tongue-tied and elusive game-plans of their leadership at Kolkata at the moment.

We will endeavour to pore deep into the psychology of all the party protagonists in the hills and their strategic maneuvers in view of a volatile predicament after the degradation of dominant stakeholder namely GJMM under outlawed Bimal Gurung and momentous circumstances in which Binay Tamang -Anit Thapa coterie sprang up occupying centre -stage. As the political atmosphere here is presently mercurial and fluid, it is surmised that the roles enacted by and the blueprint of each party is presumptive, subjective and not full-proof.

If a very successful pivotal role any party has initiated, first to stymie and then scuttle the agitation, it is the TMC or for that matter the astute brains behind the scene in artful collaboration with the GNLF.  GNLF’s  leader betrayed the trust of Gorkhas without any rationalization or clarification by writing to the CM beseeching for a talk for a truce (we will dwell more on GNLF in foregoing paragraphs). After the initial objective of derailing the hill churning and successfully bullying Gurung into exile, TMC cornered two Bimal sidekicks and loyalists to coax them into choosing between gold and dust. Gold signified safety, monetary largesse and state given honour, while dust meant incarceration and untold sufferings in the lock-up. Cunning wisdom prevailed. AT-BT naturally opted for the former, expectedly. The obstreperous rebellion then died an unnatural death. The mellowing call from the two sidekicks for peace and development, assisted with heavy-handed police action against anyone speaking for Gorkhaland, helped fizzle out feeble whimpers of protests. The thunder was swept under the carpet. The volta- face witnessed thereafter from our credulous people with their naivety was mythical and stupendous. The table was turned and fear of retribution kept everyone on their toes!

In this background, the surprising statements coming from hill TMC is baffling, either they are plain dumb not to see through the simple stratagem or they are a shade too adaptive to the slapstick comedy they are wont to, for they forget that the situation in the hills will remain uncertain as long as the absconding, illusive lone- ranger i.e. Gurung is not neutralized politically, judicially, administratively and mentally. But till the cases in Supreme Courts linger inconclusively, it will be perilous to coerce Gurung into pulverizing effect.

The saffron brigade with their rhetorical all inclusive polity sprang a surprise by clamming up during 104 days turmoil in the hills. Considered a close ally of GJMM, it chose to ignore and spurn desperate signals from Gurung to intervene. He pinned his ultimate hope on BJP of standing by his side during hours of crises, try rescue and salvage the deteriorating situation arising out of irrational, ill-conceived prolonged strike in the hills. But BJP remained non-committal all along. They presumably decided their best bet would be to clandestinely abet the worsening situation to aggravate to a point where Mamata didi and TMC would face flak from the people and give them sleepless nights. Gurung for all his nonchalance and political immaturity, failed to differentiate between a true ally and a mountebank adept in its shenanigans, dealing out false assurances. Gurung till the last moment hoped against hope that they would utter a single conciliatory sentence for him to withdraw strike forthwith. But alas the call never came! As a result, Gurung is still languishing in banishment and is uncommunicative.

Meanwhile, a change in the landscape catapulted two of his closest aides/sidekicks into celebrity positions by virtue of their vulnerability, shrewdness or sheer stroke of luck. The turn of events in their favour surprised both AT-BT immensely. Their ploy had paid off dividends! People lining up in support of rebel faction is a testimony to the level of ‘success’ or lack of it that they have garnered.

That brings us back to BJPs predicaments following humiliating heckling that their state-level leadership was subjected to by some section of hoodlums, who albeit their faces splashed across TV screens, was allegedly let off unpunished. Stunned with the eggs splattered on their faces, they are still smarting under the blow from unexpected quarters with two conundrums:

a) Whether to wait for Gurung to resurface after his exoneration to test his potential in regaining his lost realm, which at this stage appears improbable.
b) To condescend to bury the hatchet with the rebels and recognise their legitimacy in the current political, and administrative set-up cobbled up by WB govt. But that will amount to their endorsement of the state government policy in total contrast to their vehement opposition to TMC worksheet. Besides, they know the allegiance this faction will hold on to and has sworn to support during hustings.

BJP’s pulsating and deafening silence is loud enough for everyone to see and hear as their attention will remain pointedly focussed on 2019 LS elections in WB where the party president Amit Shah has earmarked at least 20 seats for BJP. Well, Ironically, unbeknownst to them, Darjeeling seat has slipping under their nose to TMC kitty. If Howrah seat sinks too, they will draw blank and end up a poor third after CPM.

After the harrowing events prior to Subash Ghising’s unceremonious fall and eviction from the hills, and acrimonious political charade till his demise leading up to the advent of GJMM under little-known maverick called Bimal Gurung, GNLF seemed to plummet further into oblivion – its support base dwindling under its non-descriptive leaders. They still clamoured for Sixth Schedule status for Darjeeling hills, singing paeans of praises for their fallen supremo. But through providence or design, their fortunes appear to be brightening after their commonplace leader Mann Ghising wrote a fervent letter to the CM requesting for a dialogue to end the unenviable impasse. Perhaps, only those involved will know if the correspondence was undertaken unwittingly, or if it was done under instruction from Nabanna. They say he wrote it with an ‘acid’ in his heart. That acid went to work wonders in turning things around favourably for them. His wishes were granted. Bipartite talks followed, Nabanna sponsored ‘peace’ prevailed in the hills though an undercurrent of disquiet rippled unnoticeably. Months of macabre events of shooting, killing, arson and untold misery were dismissed and forgotten with the emergence of a new unchallenged order. People watched in awe unforeseen tableau unfolding in the neighbourhood. Some people on stage received accolades for no apparent reason, for no plausible success. Losers were acclaimed, garlanded and lionized for achieving nothing. And lo and behold! Suddenly one fine morning, GNLF bags indisputable honour of its chief heading ‘Hill Area Development Committee (HADC)’ though one wonders what streamlines its working procedures with that of GTA, also known to work for developments?

As the election to elect new GTA board members is overdue which cannot be put off sine die, the fate of present dispensation hangs in ominous suspended animation. Which means HADC is here to stay even after present shroud of uncertainty lifts. GNLF this way has clinched an encouraging deal in its favour.

‘Every which way but to lose’ is the dictum that suits well to describe the fate of the party that still calls shots in the hills, albeit a little differently this time around. It has split into two factions – one absconding following an unprecedented spate of violence, the blame of which squarely thrust on his shoulders. Incommunicado with his supporters, interspersed with occasional audio messages, laden with a lookout notice and hounded by security forces, he is rendered a fugitive without a future and a position. While he is fighting a traumatic judicial battle in Supreme Court, his antagonists are riding high in exuberance of unclaimed success, indulging in fantasy of make-believe victory. The party is surely headed for doom as the leader in exile is conspicuous by his absence to claim his fallen domain, while the faction led by rebels is basking on borrowed time in sycophancy. Notwithstanding the overt support some section of people is offering to the rebels, it would be naive to conclude that the takeover is complete. In contrast, the way GNLF is drawing crowds into its fold it won’t be long before they will claim total sway over hills political arena.

There is another remote but still a feeble chance of nebulous spectre of Bimal Gurung staging a spectacular comeback in the event of his acquittal from all the charges of crimes he is alleged to have committed. It is a long rope but it cannot be discounted with a pinch of salt, considering the elastic mindsets of hill people as evinced by the recent manifestations of transformation.

As for other political entities namely CPRM, JAP, ABGL et al – their significance hardly matters now given the negligible public support they enjoy. Whether the present uncertainty will cast an intriguing drama unfurling in political circle sending ripples of shockwaves across hills is something we can only fathom but not bet on. All said and done – the hills are agog with anticipation even as the trends point to a vacillating void and nihilism.

Be the first to comment on "Taking Stock: The Hills are Agog with Anticipation, Trends Point to a Vacillating Void and Nihilism"