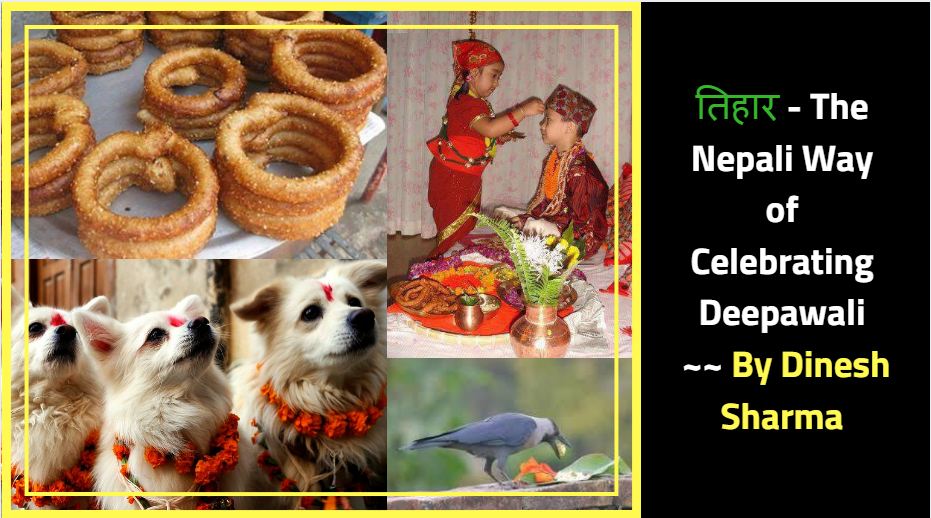 Fifteen days after Dashain, the biggest festival in the Nepali calendar comes the Tihar festival, celebrated over the world as Deepawali or Diwali. While Dashain is about family reunions and seeking blessings from elders, Tihar is more about songs, dances, rekindling brother-sister love and family bonds.

Tihar lasts for 5 days, during which every Nepali people prays to the nature and animals, in addition to the rituals of worshipping Lakshmi, the goddess of wealth. Every household goes through its annual ritual of cleaning, repairs, and painting, just before the beginning of the festival. As per the traditions of the Hindu people, the day also marks the return of Lord Rama to Ayodhya, and so every house is decorated and lit with lamps in the welcome of the gods.

Day#1: Kaag Tihar – The first day of of the festival is dedicated to Crows, which is considered to be messenger of Yamaraj, the god of death. As a way of pleasing the lord, Crows are fed with prayers for for longeviety of life, and good health.

Day#2: Kukkur Tihar – The second day of Tihar is to celebrate the cherished relationship between the humans and dogs. The dogs are fed delicious food, offered tika, and garlanded. In the Hindu mythology, dogs are associated with Bhairava, a manifestation of Lord Shiva, and keep a watch over the gates of Hell. keeping were the of considered a fierce manifestation of Lord Shiva. Yema, the god of death himself owned two guard dogs, each with four eyes.

Day#3: Gai Tihar – The third day is the most important day during the 5-day festival, and is reserved for the worship of the Cow. In the evening, the goddess of wealth, Lakshmi is worshipped in every house and lamps are lighted to welcome the goddess of wealth and prosperity. The worship of cows and goddess Lakshmi on the same day is symbolic. In the ancient times, owning a cow was considered auspicious and abundance. The milk, manure, and gentle character of the cow made it an indispensable member of the family, taking care of nutrition for both humans and crops.

After every family finish their Lakshmi puja and lighting up the diyas, Bhailini (young females) and Deusi (young boys) visit every house in the neighborhood, singing, dancing, and praying for the family. As a token of appreciation for their prayers, the families give away some food and money to the Bhailini and Deusi groups. The collected money is later used for feasts and different welfare and social activities in the neighborhood.

Day#4: Govardhan Puja – The fourth day of the festival is for the worship of Bull and Ox. Being a predominantly agrarian lifestyle, the Ox is a central figure in the family, helping the family in their fields and without whom, the families will struggle for their food. This is also the first day of Sambat Calendar, the Nepali lunar calendar.

Day#5: Bhai Tika – The last day of Tihar festival is the day to rekindle love and celebrating the strong bond between brothers and sisters. While in most other similar cultures, the brothers are generally the protectors, it is just the opposite for the Nepali people. The sisters promise to protect their brothers from any harm, and as blessed by the Yamaraj, anyone who receives Tika from their sisters will never die on this day.

The writer can be reached at dineshcold@gmail.com